Six years after the Packers traded Brett Favre to the Jets amid an ugly falling-out between the three-time MVP and the organization, the two sides have made up.

The Packers will hold a news conference at 1:30 p.m. Central time Monday to announce that they’ll retire Favre’s No. 4 jersey and induct the gunslinger into the team’s Hall of Fame.

You can watch the press conference live for free on this page at the Packers website.

Favre played for the Pack from 1992 to 2007, leading the team to two Super Bowl appearances and one title. He announced his retirement following the 2007 season, but came out of retirement five months later after the team had already publicly committed to Aaron Rodgers as its starting quarterback.

In an effort to avoid one of the most awkward quarterback controversies in league history, the team traded Favre to the Jets prior to the 2008 season. He played one year for Gang Green before further angering Packers fans by signing with the rival Minnesota Vikings, where he played in 2009 and 2010 before retiring good.

ESPN’s Rob Demovsky reported Sunday night that the announcement would take place, and Favre later confirmed the news in a statement posted on his website.

Check out the text of Favre’s statement here:

I’m pleased to announce that I will be returning to Green Bay, Wisconsin in 2015 for induction into the Green Bay Packers Hall of Fame and retirement of my jersey.

It was a tremendous honor to play 16 years for the Green Bay Packers. Now to have my name placed among others such as Starr, Hornung, Kramer, Taylor, Lambeau, Nitschke, Lombardi, Davis, White and Hutson is a special honor that I share with all of my teammates and coaches, and that would not have been possible but for the foresight of Ron Wolf, the greatest GM In the history of the NFL.

I’m truly looking forward to celebrating and sharing this special moment with all of the great fans of the Green Bay Packers. 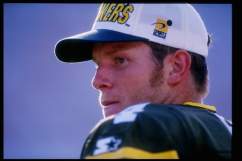 Brett Favre on the Packers: The Photos You Need to See