A 6.5-magnitude earthquake, seen in the video above, shook China’s Yunnan province Sunday, resulting in severe structural damage, electrical and telecommunication outages and a lack of transportation in the area, according to I Cross China.

According to I Cross China, the quake destroyed 12,000 homes and damaged 30,000. Older buildings were particularly vulnerable to the quake, as well as residential structures, I Cross China reports.

3. The Quake Hit a Depth of Six Miles

According to the Associated Press, The U.S. Geological Survey says the earthquake, which it is reporting as a magnitude 6.1, struck at a depth of 10 kilometers, or six miles. China’s state broadcaster, CCTV, said this is the strongest quake Yunnan has seen in 14 years, AP reports.

4. Locals Said the Streets Looked Like a ‘Battlefield After Bombardment’

According to I Cross China, Ma Liya, an area resident, told them via phone that the streets of the province looked like a “battlefield after bombardment” after the quake hit. Ma Hao, a college student volunteering in the area told I Cross China:

Honestly, it’s such a shame that we had no time to take care of the bodies. We need to help those alive first.

It’s so terrible. The aftermath is much much worse than what happened after the quake two years ago. I have never felt so strong tremors before. What I can see are all ruins.

5. Government Offices Are Sending Supplies to the Area

AT LEAST 150 PEOPLE ARE KILLED AND SOME 1,300 INJURED AFTER A MAGNITUDE 6.1 EARTHQUAKE STRUCK IN SOUTH-WEST #China pic.twitter.com/fnl5X2AP0y 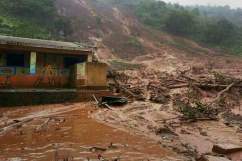