Ted Robinson, the voice of the San Francisco 49ers, was suspended two games by the team for insensitive comments he made on a radio program about domestic violence in the wake of the Ray Rice firestorm.

Robinson said it was “pathetic” that the two got married after the Ravens running back knocked her out with a left hook in an Atlantic City elevator. Robinson, who was also suspended by the PAC-12 Network while he undergoes sensitivity training, also insinuated that the victim was to blame.

1. Robinson Made the Comments on KNBR 680-AM While Hosting the Drive-Time Show

According to the San Franciso Chronicle, Robinson said Rice’s then-fiance Janay Palmer was partly to blame for not speaking up. “That, to me, is the saddest part of it,” Robinson said on the air. He also said her decision to marry Rice after she was assaulted was “pathetic.”

Robinson issued an apology later in the week following his suspension.

I want to unconditionally apologize for my comments the other day,” Robinson said. “As a professional communicator, I am responsible for my words. My choice of words was careless and does not reflect my true feelings about domestic violence. I understand that the cycle of abuse keeps people in unhealthy relationships. No blame or responsibility for domestic violence should ever be placed on a victim.

2. The 49ers Have Come out Strong Against Domestic Violence

Earlier this month, 49ers coach Jim Harbaugh laid out a no-tolerance policy to the media in terms of domestic violence. “You ask me how I feel about domestic violence. I can be very clear about that. If someone physically abuses a woman and/or physically or mentally abuses or hurts a child, then there’s no understanding,” Harbaugh told reporters. “There’s no tolerance for that.”

In issuing the two-game suspension, which was originally the same ban Rice received from the NFL before the knockout video surfaced, 49ers president Paraag Marathe said Robinson’s comments were intolerable.

The comments made by radio broadcaster Ted Robinson on Monday were offensive and in no way reflect the views of the San Francisco 49ers organization … Our organization stands strongly against domestic violence and will not tolerate comments such as these.

3. 49ers DT Ray McDonald was Involved in a Domestic Violence Case but Hasn’t Been Suspended Yet

Robinson’s suspension comes as the 49ers have been criticized for allowing defensive tackle Ray McDonald to play.

McDonald was arrested on August 31 on suspicion of felony domestic violence. According to USA Today, McDonald has not been charged with a crime in connection with an incident that left his fiancee with “visible injuries,” according to the San Jose Police Department. 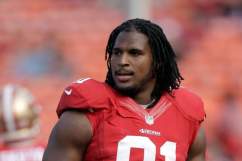 In 2013, Robinson signed a five-year extension that will keep him on the job through 2018. He has also worked for the San Francisco Giants, Oakland A’s, Minnesota Twins, and New York Mets during his 30-year broadcasting career. Robinson has also worked the Olympics for NBC Sports. One of his more famous calls of a 49ers game came in the final seconds of a 2011 playoff that sent San Francisco to the NFC Championship Game.

5. Robinson is Not the First Broadcaster Suspended for Comments Related to the Ray Rice Violence Story

In July, ESPN personality Stephen A. Smith was suspended for one week by the network for making insensitive comments about the role of women in domestic abuse cases when Rice’s initial two-game suspension was announced.

Smith said the following during an appearance on “First Take”:

We know you have no business putting your hands on a woman. I don’t know how many times I got to reiterate that… But what I’ve tried to employ the female members of my family, some of who you all met and talked to and what have you, is that again, and this what, I’ve done this all my life, let’s make sure we don’t do anything to provoke wrong actions, because if I come, or somebody else come, whether it’s law enforcement officials, your brother or the fellas that you know, if we come after somebody has put their hands on you, it doesn’t negate the fact that they already put their hands on you. So let’s try to make sure that we can do our part in making sure that that doesn’t happen. 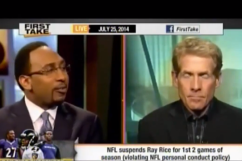 Loading more stories
wpDiscuz
2
0
Would love your thoughts, please comment.x
()
x
| Reply
San Franciso 49ers announcer Ted Robinson was suspended two games by the team for insensitive comments he made on the radio about domestic violence.