A paroled felon will be charged with the kidnapping and murder of a beloved real estate agent after her body was discovered the day after his arrest.

Arron Lewis, 33, the suspect in Beverly Carter’s disappearance, was arrested Monday in Little Rock, Arkansas. Carter, 49, a well-known real estate agent, was last seen alive on the evening of September 25 while showing a home in Scott, Arkansas.

Her body was found on Tuesday morning, buried in a shallow grave at a concrete company in the town of Cabot, about 20 miles from where she was abducted. ArkansasOnline reports Lewis once worked for the business.

Details on the heartbreaking discovery of Beverly Carter’s body: 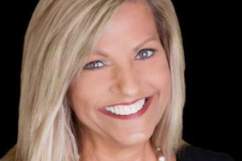 Lewis will now be charged with capital murder, but he claims it was an accomplice named “Trevor” who killed Carter and that he hadn’t “seen her for two days.” He made the claims about his “co-defendant” to reporters in the interview below, adding that Carter was targeted because “she was just a woman that worked alone, a rich broker.”

Local reporter Drew Petrimoulx of Arkansas Matters says Trevor has been interviewed by investigators and “had nothing to do with it.”

Investigator in #BeverlyCarter case: "Trevor" acquaintance of #ArronLewis "interviewed extensively" had "nothing to do with it." #ARnews

Here’s what you need to know about Arron Lewis and the events leading up to his arrest:

1. He Crashed a Car & Escaped From a Hospital the Day Before His Arrest

Lewis was picked up by police on the morning of Sunday, September 28, after he was involved in a one-car accident in Jacksonville, Arkansas. He was taken to a hospital and, while he was supposed to be having a CT scan, slipped away from the medical center, reports Arkansas Matters. He was not under close watch because he hadn’t been charged with a crime yet.

Below you can read the sheriff’s department’s account of the car accident. The bloody photo of Lewis seen above was taken by police at the scene of the crash.

2. Lewis Is Being Held on $1 Million Bond

Aaron Lewis arrested in Pleasant Point apartments today according to eyewitness who claims he pulled knife of him. pic.twitter.com/G548R8V7Ay

Lewis was arrested by Little Rock police around 10 a.m. Monday, September 29, after a foot pursuit at Pleasant Pointe Apartments, 1602 Green Mountain Drive. A witness who aided in the arrest described the dramatic capture to Forbidden Hillcrest:

Below you can hear the 911 call from a witness who spotted Lewis:

He was taken into custody and booked on a $1 million bond.

Below you can read the bench warrant charging him with kidnapping, issued the same day as his escape from the hospital.

According to Arkansas Online, Lewis is on parole until 2017 for prior felonies. In a November 2013 Facebook post, seen above, Lewis details his prior crimes and suggests that anyone who would judge him for past sins “remember that I don’t do anything anymore … before you judge me for who I was, look at who I am.”

Pulaski County Sheriff’s Department spokesman Lt. Carl Minden told the media, “We do consider him dangerous based on the nature of the charge and based on the fact we haven’t located Mrs. Carter.”

On his Facebook page, Lewis posts frequently about a woman he calls his wife.

In March 2014, he posted that his marriage was in trouble and called himself “single,” just one week after declaring his love for his wife:

By July of this year, when he last posted to Facebook, Lewis was again celebrating marital bliss. He also posted in July that he had landed a new job, though his page now describes him as “Chief Executive Officer at Self-Employed.”

Beverly Carter was first reported missing by her husband, Carl. She had been showing a house to an unknown client in Scott, Arkansas. Carl says she was excited because it was a cash sale. When she didn’t return by 8 p.m. he knew something was wrong and went to the home, where he found the door wide open. Beverly’s car was in the driveway, and nothing was missing from her purse.

Both Carl and a Friend told NBC that they received uncharacteristic texts from Carter’s phone after 7 p.m. that night, including one saying she was “out with the girls having drinks” — but Carter doesn’t drink.

In the video interview above, an emotional Carl describes the night she went missing and says “I just would like to have my wife back. I beg anybody, just take her over and drop her off on the sidewalk and keep driving.”

The search for the well-known real estate agent has gripped her community. On Saturday, some 250 volunteers joined in the search for Carter. The hashtag #FindBeverly is being employed on Twitter, and the Find Beverly Carter Facebook page has nearly 45,000 likes.

Beverly Carter was described as 5-foot-2, 145 pounds, with blonde hair and green eyes. She was last seen wearing a black sleeveless shirt and red shorts. Anyone with information about her whereabouts was asked to call 501-340-6963.

Loading more stories
wpDiscuz
27
0
Would love your thoughts, please comment.x
()
x
| Reply
Arron Lewis, the main suspect in the disappearance of real estate agent Beverly Carter, is in custody and held on a $1 million bond.