Bryan Hamade is the man who is denying that he is the hacker behind the 4Chan nude photo leaks. On August 31, 101 celebrities, including Oscar-winner Jennifer Lawrence, had nude images leaked online, causing a social media frenzy.

Here’s what you need to know about the man who says he’s not responsible:

1. His Username On 4Chan Was ‘BluntMastermind’

The username that Hamade went by on 4Chan, ‘BluntMastermind,’ was also traced through his email to several other posts on tech and college forums.

2. He’s Says he Was Caught Up in a Bitcoin Scheme

According to Buzzfeed, “I am not behind this. It was so stupid — I saw a lot of people posting the actual leaks and bitcoin addresses and I’ve read a lot about bitcoin and how they’re are valuable and I thought, oh cool I’ll get free bitcoins.” He added that he has no idea how somebody could hack into so many celeb accounts.

3. He Works for a Tech Company

Hamade is listed as the “Coding Specialist” on the website of Southern Digital Media. In the wake of the scandal, the company’s entire website was deleted. On his profile section, it reads:

Bryan is a recent graduate of the University of Georgia. He is our technical expert and specializes in PHP, MySql, HTML, and Java.

On a forum thread about transferring schools, a user named Blunt Mastermind wrote “I have always been exceptionally smart.”

Both Hamade’s Twitter and LinkedIn accounts have been deleted as his association to the 4Chan scandal became public.

4Chan is described as an “imageboard website.” Its users generally post pics anonymously. Not only is registration not required, it’s not possible, making it unique among social forums. The Guardian described the site as “lunatic, juvenile … brilliant, ridiculous and alarming.” 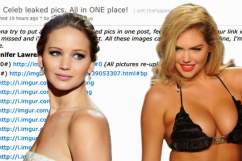