Three dead babies were found in a house in Massachusetts among used diapers and vermin. WCVB reported that Erika Murray was charged on the night of September 11. Murray was the babies’ mother. Diapers, bugs, and trash were stacked up in the home.

Erika Murray in court for: Fetal death concealment out of wedlock and Witness intimidation #7news pic.twitter.com/L9LMZGfHLk

Erika Murray will face charges in an Uxbridge court of fetal death concealment out of wedlock, witness intimidation, animal cruelty and two counts of permitting substantial injury to a child. After an appearance in court, it was ruled that Murray would be held without bail. Her lawyer said that she is mentally ill, reports the Boston Globe. She pleaded not guilty.

2. There Could Be More Dead Children at the House

Police have said that there could be more than three dead babies at the home. The genders of the babies haven’t been ascertained. When searching the home on September 10, police found “the body of what appeared to be a newborn baby, tucked into the back of a closet in one of the rooms of the house,” according to CBS Boston. Murray was arrested at a friend’s house in Northbridge.

3. Social Services Had Already Been to the Home

The few neighbors that are talking say they never saw parents, but saw kids playing or going to school. #Blackstone

Four other children had been taken from the home by social services back in August 2014. According to the Boston Globe, police removed four children, a 6-month-old, a 3-year-old, a 10-year-old and a 13-year-old from the house at 23 St. Paul St. In that instance, police were responding to calls about a child crying in house. Prior to that incident, social services had no contact with the home. The Boston Herald reported the two younger children had no birth certificates.

Blackstone, Massachusetts, is located about 50 miles south of Boston.

4. Her Neighbors Didn’t Know She Was Pregnant

Mom faces charges tied to #Blackstone house of horrors. At noon: What #WBZ-TV has learned about inspections at home. pic.twitter.com/nTMvICiKxA

Neighbors didn’t know that there were babies in the house.

5. Dead Animals Were Also in the House

The remains of dogs and cats were also found in the home. The Boston Globe reports that animal cruelty charges could be filed against Murray. 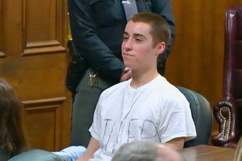