Frenchman Gael Monfils, the No. 20 seed in the U.S. Open, gave second-seeded Roger Federer all he could handle in Thursday night’s quarterfinal match.

Here’s what you need to know about the underdog Frenchman: 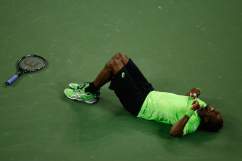 Roger Federer vs. Gael Monfils: Pictures You Need to See

2. He Had a Dance-Off with Laurent Lokoli in Paris

Monfils is animated both on and off the court. The day before the opening matches at the French Open in May, Monfils and fellow Frenchman Laurent Lokoli engaged in a dance-off on Kids’ Day.

There have also been clips of some of Monfils’ showy and sometimes risky shots during big matches.

Monfils has been noted for his distinct style of play. He has been nicknamed “Sliderman” due to the way he slides across clay courts such as the one at Roland Garros. Although his unusual techniques are erratic and entertaining, he is known to be consistent and is usually 2 steps ahead of his opponent at all times as an experienced player when it comes to his placement on the court. He also has one of the best victory dances in tennis as shown by the video above.

Monfils parents are from the Caribbean, but moved to France because of his father’s job. His father, Rufin, was formerly a soccer player from Guadalupe before becoming an agent for Telecom while his mother, Sylvette, is a nurse from Martinique.

Both he and his younger brother, Daryl, play tennis at a professional level, but Gael has always been a standout in any sport he picked up. Watch the video above to see some of his stunning athletic moves on the tennis court.

5. He Has Beaten Rafael Nadal

Monfils has been competing against the top players in tennis since his debut in 2004. Despite Nadal’s higher ranking, Monfils has managed to beat him 2 of the 9 times he has played him.