Hannah Graham was last heard from when she texted a friend at 1:20 a.m. on September 13. Graham is an 18-year-old student at the University of Virginia, the college have asked anybody with any knowledge of her whereabouts to contact the Charlottesville police on 434 970-3280 or Crimestoppers on 434-977-4000.

She’s a native of Alexandria, Virginia.

1. Graham Was Wearing a Black Crop Top When She Was Last Seen

Graham is white, 5’11” with a “skinny build.” She also has blue eyes, light brown hair and freckles. When she was last seen she was wearing a black crop top with mesh cut outs.

CBS 6 reports that Graham last contacted friends at 1:20 a.m. on Saturday, September 13, via a text message.

According to police, Hannah Graham was “fairly well intoxicated” when she was last seen. Despite that, cops say that she knew the area where she was last seen well. In her last text, she told a friend she was lost. 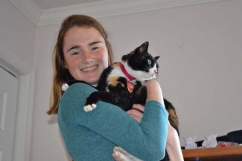 4. Bloodhounds Are Searching For Graham

CBS 6 reports that police searched for Graham using bloodhounds in the area around the campus. That search turned up nothing.

According to her Twitter account, Graham is a big fan of sports, specifically English soccer and Maryland based teams. She is a native of England.

One of her tweets last week related to Ray Rice. This was her last tweet on September 11:

Loading more stories
wpDiscuz
6
0
Would love your thoughts, please comment.x
()
x
| Reply
The University of Virginia student's last contact was when she texted a friend at 1:20 a.m. on September 13.