Seattle running back Marshawn Lynch is one of the best running backs in the league. After leading Seattle to a Super Bowl title last year, he hopes to help the Seahawks become the first team since the New England Patriots accomplished the feat in the 2003-04 and 2004-05 seasons.

That quest begins Thursday night, when Lynch and the Seahawks host the Green Bay Packers.

Here’s what you need to know about Lynch:

Lynch is known as “Beast Mode” simply due to his hard-running style. But the running back has turned the slogan into a business of its own.

According to ESPN, Lynch earned in the mid-six figures from licensing the phrase in 2013 from his registered trademarks on clothing and hats.

He’s looking to add to his brand with trademarks pending on sunglasses, headphones, bracelets and cleats.

Prior to his current nickname, he was known as “Money” while playing college football at Cal. 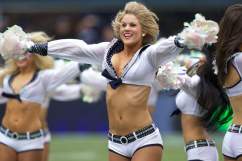 2. He’s Had Arguably the Greatest Run in History

When the Seahawks played the New Orleans Saints in the 2010-11 NFC Wildcard, Lynch had arguably the greatest run ever against the defending Super Bowl Champs. With the Seahawks holding onto a 34-30 lead with just over 3 minutes remaining in the game, Lynch broke over a half dozen tackles to score on a 68-yard touchdown run.

The play is considered one of the best runs of all-time, and has inspired some hilarious commentaries.

3. He Held Out of Training Camp at the Beginning of the Season

On July 24, former Seahawks fullback and Lynch’s good friend Michael Robinson announced on NFL Network’s Inside Training Camp that Lynch would hold out of Training Camp while he waits for a restructured contract from the Seattle Seahawks.

Lynch never got the deal he wanted, but still showed up to training camp a week later. However, the Seahawks will “add some financial concessions to the contract,” according to ESPN.com.

4. He Comes From a Football Family

Lynch, who grew up in a tough neighborhood in Oakland, California with his three siblings and rarely saw his father, has several relatives who have also played professional football.

They include his cousin, wide receiver Robert Jordan, who played alongside Lynch at Cal from 2004–2006; former Oakland Raiders quarterback JaMarcus Russell; and quarterback Josh Johnson of the San Francisco 49ers.

Lynch’s uncle, Lorenzo Lynch, also had an eleven-year career in the NFL.

.@MoneyLynch can go #BeastMode on 4,000 Rainbows without breaking a sweat. He’s ready for anything. #TeamSkittles #ad pic.twitter.com/98gfM4fGXv

Lynch’s favorite candy is Skittles. In fact, he even had the candy designed on his cleats in 2011. That didn’t sit too well with the NFL, though, as the league fined him for the design.

Skittles signed the running back to a deal just before last season’s Super Bowl. The candy company then launched a limited edition Seattle Mix, donated to Lynch’s foundation during the Super Bowl, and also is featuring Lynch in their commercials.

Loading more stories
wpDiscuz
0
0
Would love your thoughts, please comment.x
()
x
| Reply
Lynch is one of the best running backs in the NFL, and looks to lead Seattle to its second-consecutive Super Bowl. Here's what you need to know about him.