In a back-and-forth game, Oregon outlasted Michigan State in a shootout, 46-27.

While Oregon won by nearly three touchdowns, the Ducks and Spartans battled back and forth for 3 1/2 quarters, until Oregon pulled away at the end of the fourth quarter.

After both offenses struggled early in the game, Oregon struck first, and then went for a 2-pt conversion to take an 8-0 lead late in the first quarter after rushing in on 4th-and-1.

The touchdown drive was set up with a long interception return by Erik Dargan, who was on the receiving end of a brutal hit by a Michigan State lineman in this Vine video.

Michigan State was finally able to get some offensive momentum. The Spartans put together a long drive before running back Jeremy Langford broke open in the middle on 3rd-and-1 for a 16-yard touchdown run.

Michigan State then responded with a 34-yard field goal to cut Oregon’s lead to one-possession.

Michigan State refuses to go away.

Despite being outplayed for most of the first-half, the Spartans are only one-point down just before halftime. The Spartan defense shut down Oregon’s offense, and, after a bad punt, the offense took over at the Oregon 38-yard-line.

After stopping Oregon’s offense yet again, Michigan State’s offense gave the Spartans the lead right before halftime despite being dominated by the Ducks for most of the first half. The Spartans scored two touchdowns in just two-and-a-half minutes, the last one coming 18 seconds before the break.

Michigan State tacked on a field goal to its lead over Oregon, making it 20-unanswered points in seven and a half minutes against the Ducks.

Prior to the Spartan field goal, the Ducks struggled to move the ball and had to punt it away on its opening drive of the first half.

#Ducks have a total of 4 yards on their last 5 possessions. #Spartans

After not being able to move the ball for most of the second and third quarters, the Oregon Ducks finally struck back at Michigan State when Marcus Mariota hit Devon Allen for a 24-yard reception. With less than 20 minutes remaining in the game, Michigan State leads 27-25.

Oregon took advantage of a blown coverage play from Michigan State when Mariota hit Keanon Lowe for a touchdown to retake the lead with just 1:30 left in the third quarter.

And there's a bust that Mariota took advantage of. Easiest throw of the day. Ducks back in front, first team to score 30 on MSU since 2011.

Now its the Ducks’ offense that can’t be stopped.

Oregon has scored three unanswered touchdowns in just seven minutes to take a 39-27 lead early in the fourth quarter. Royce Freeman tacked on the latest score for the Ducks on a 38-yard run.

With the score, Oregon became the first team since 2011 to score more than 30 points against Michigan State.

Floodgates now open. On a defense that hasn't flooded in a long time. Wow.

Oregon then added one final touchdown with 30 seconds remaining. 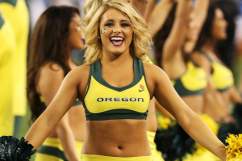 Read More
College Football
Michigan State and Oregon battle it out in a matchup of two Top-10 teams.