After a turnover-marred first half, the Miami Dolphins looked like they were in for a long afternoon in their season opener against the New England Patriots.

The Patriots had raced to a 10-point halftime lead and appeared on their way to winning their 11th straight season opener.

Then the Dolphins came to life.

Miami held New England scoreless in the second half and beat the favored Patriots 33-20 in the season opener for both teams.

Click here for a full box score via ESPN, and click the link below to check out a photo gallery from the game. 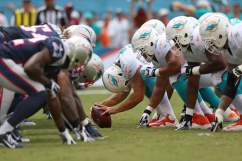 Patriots vs. Dolphins Photos: The Pictures You Need to See

Miami was clinging to a 3-point lead when Knowshon Moreno plowed through a wall of Patriots defenders for a touchdown that made it 30-20 with 3:29 left in the game.

Moreno was hit initially at the 8 yard line, but stayed on his feet and was able to stretch the ball across the goal line.

The Dolphins Dominated the 3rd Quarter

After the Patriots surged to a 20-10 halftime lead, the third quarter was all Miami. The Fins tied the game at 20 on a 14-yard touchdown strike from Ryan Tannehill to Mike Wallace with 6:55 left in the quarter and took their first lead since early in the first quarter on a 22-yard Caleb Sturgis field goal with 47 seconds left in the quarter.

Shane Vereen Put the Pats on the Board

The Patriots responded to Miami’s touchdown with a drive of their own that culminated in a 2-yard Shane Vereen touchdown that tied the game at 7 with 5:10 left in the first quarter.

The Pats took the lead later in the quarter on a Stephen Gostkowski field goal, then extended it when Brady hit Rob Gronkowski cutting across the goal line to make it 17-7 with 8:37 left in the second quarter.

The Dolphins Scored on Their Opening Drive

First touchdown of the day goes to the Miami Dolphins. Ryan Tannehill to Lamar Miller for the score. MIA 7 – NE 0

The Patriots’ defense is being touted as one of the most improved units in the league, but it sure didn’t look that way on the Dolphins’ opening drive.

Ryan Tannehill led the Fins down the field and hit Lamar Miller for a touchdown pass that put the home team up 7-0. 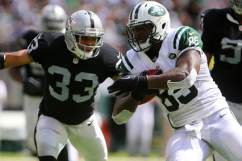 Loading more stories
wpDiscuz
0
0
Would love your thoughts, please comment.x
()
x
| Reply
Keep it here for live updates and highlights as the Miami Dolphins host the New England Patriots in the NFL season opener for both teams.