Robert Griffin III suffered a nasty ankle injury Sunday. After scrambling right and making a throw early Sunday, he came down wrong and was carted off.

Here’s what you need to know about the injury.

1. He Injured the Ankle While Scrambling

Griffin was hurt while making an acrobatic across-the-body throw near the sideline while being pursued by Jacksonville linebacker Paul Posluszny. Griffin landed awkwardly on his ankle as he finished the throw and then tumbled out of bounds.

The pass was caught by DeSean Jackson for an 11-yard gain.

When Griffin was carted off, he appeared to be wiping tears away as fans chanted “R-G-3!”

2. He Could Be Out For Long Time

The Redskins initially announced RG3 was “questionable” to return but quickly ruled him out against Jacksonville.

INJURY UPDATE: QB @RGIII (ankle) downgraded to OUT for the game. #JAXvsWAS

NFL Network’s Ian Rapoport is reporting that the fear is Griffin dislocated his ankle, which could keep the former Heisman Trophy winner for at least a couple of games.

The fear is #Redskins QB Robert Griffin III has a dislocated ankle, source says. There will be tests to confirm. But obviously not good news

Griffin’s backup, Kirk Cousins, a Michigan State product, warmed up on the sidelines as soon as RGIII went down with his injury, and then stepped into the game and immediately threw a touchdown pass.

Cousins threw 12 consecutive complete passes to start the game and finished with 250 yards and two touchdowns in Washington’s 41-10 win. 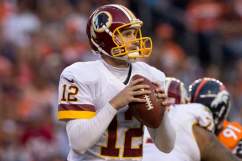 Wide receiver DeSean Jackson was also injured in the first quarter with a left shoulder injury. He also did not return to the game Sunday.

This isn’t the first time the Redskins star has had a leg injury. During his record-setting rookie season in 2012, Griffin missed all or part of four games due to various injuries, including a torn right ACL that led to reconstructive knee surgery.

He also missed the last three games last season, and never looked to fully recover from his reconstructive knee surgery.

Griffin also tore his right ACL while playing at Baylor.