Former NFL kicker Rob Bironas, who died late Saturday night in a car crash near his Nashville home, had just gotten married in June to Rachel Bradshaw, a country singer whose father is Hall of Famer Terry Bradshaw.

Rachel is the daughter of NFL legend Terry Bradshaw, a four-time Super Bowl champion who now works as an analyst on Fox’s pregame and postgame shows.

Bradshaw talked about his daughter’s romance with Bironas last year on Jimmy Kimmel Live, telling Kimmel that at first, he didn’t want Rachel to marry Bironas. You can watch the clip above.

“This is going to be one of the hardest asked-for hands in marriage you’ve ever been through,” Bradshaw said. “I ignored him, I didn’t invite him to play golf, I was rude to him, and I absolutely messed his vacation up.” 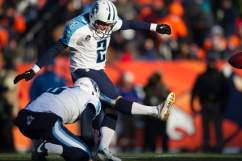 Rachel, 25, married Rob Brionas on June 29th, 2014. The happy couple went to Italy for their honeymoon.

Here is Rachel’s proud father, singing a duet with his daughter:

And of course, the father-daughter dance:

3. Rachel Grew Up In Dallas, Texas

@RachelTBradshaw I found this pic In my book about your dad #LookingDeep hope u enjoy this, such a cutie ! pic.twitter.com/fRKKtR6lsu

Rachel grew up in the suburbs of Texas before moving to Nashville to go to college and pursue a singing career.

RIP Rob Bironas: The Tweets You Need to Read

4. Rachel Is a Country Singer

Rachel signed with the Bigger Picture Group and has become an up-and-coming country singer.

In Nashville, she co-wrote with singer Jerrod Nieman “What Do You Want”, which became Neiman’s second top five single.

She is shown in the video above, singing the national anthem at the Pittsburgh Steelers game for the 40th anniversary of the Franco Harris Immaculate Reception at Heinz Field.

Early this year, Rachel went on tour with Josh Turner as an opening act.

In 2006, she graduated from high school and starting pursuing music professionally, while also attending Belmont University in Nashville.

Rachel also appeared on Nashville, a reality show based on musicians trying to make it in Nashville.