A two year-long campaign from both sides culminates on September 18 when Scotland’s people vote whether they wish to remain part of the United Kingdom. If the “Yes” campaign wins, then Scotland will secede for the first time since joining the Union in 1707. If the “No” campaign wins, British Prime Minister David Cameron will still face scrutiny from rival politicians over how the vote got to be so close.

That’s 5 p.m. Eastern time. Since the wee morning hours, thousands of voters have been turning out and lining up on the streets of Scottish cities and towns. A record turn-out is expected. Among the electorate for the first time are voters of ages 16 and 17. For the referendum, 97 percent of the population of Scotland are registered to vote. Around 80% of those are expected to cast their ballot. Meanwhile, English people, many of whom have campaigned passionately for a ‘No’ vote, can just sit back and watch.

2. Results Will Be in Tomorrow Around 7 A.M. Scottish Time

Initial results in the voting are expected around 7 a.m. Scottish time, or 2 a.m. Eastern time. Opinion polls are close, disputed and inconsistent. The day before the vote, the “Yes” vote was slightly ahead in the polling.

3. If ‘Yes’ Wins, Alex Salmond Will Be the Scottish Prime Minister 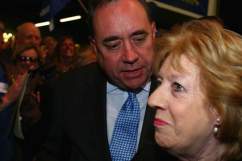 According to the “Yes” campaign website, if independence is won, over a 10-year period Scotland will develop its own army. The same article adds:

There is a general consensus in Scotland against the presence of nuclear weapons here because they are immoral, they are incredibly expensive and almost useless in terms of protecting us against the most significant threats to our national security.

It would leave David Cameron with a problem about where to store the nuclear weaponry because, according to Stars and Stripes:

Britain has no existing infrastructure capable of meeting the security requirements for hosting nuclear warheads and the submarines that can fire them except for the Scottish base in Faslane, experts say.

5. Andy Murray Has Come Out for a ‘Yes’ Vote

Huge day for Scotland today! no campaign negativity last few days totally swayed my view on it. excited to see the outcome. lets do this!

Unlike many Scottish celebrities, tennis star Andy Murray is pulling for a “Yes” vote. He joins others such as actors Sean Connery and Brian Cox in wanting Scotland to become independent. Whereas others, such as former premier Gordon Brown and Manchester United legend Sir Alex Ferguson, are pulling for the “No” ticket.