As Scottish voters decide on whether or not they wish to become independent of the United Kingdom, we have all of the best sources for you to follow while the ballots are counted. Results are expected to be announced at around 7:00 a.m. GMT. Results will announced area-by-area according to this map:

The Guardian’s live blog is updated every minute or so with their polls saying its ‘Yes’ 47% and ‘No’ 53%, keeping Scotland in the union.

Also updating regularly is the slightly more conservative UK Independent, also with a live blog, they’re not even offering an exit poll right now, how exciting?

The always wonderful France24 are offering you the chance to follow the referendum results from inside a Scottish pub.

Finally, of the reputable sources anyway, is the Daily Telegraph, they’ll also offer a more conservative view of things. The Telegraph is also giving the 53-47 split.

In terms of TV broadcasting, laws in the United Kingdom dictate that the TV news can’t really broadcast much about the referendum until after the polls close at 10 p.m. GMT. Something that’s reflected brilliantly in this Sky News tweet:

We can't talk about Scotland much until 10pm today so here's a story about vacuum cleaners http://t.co/cyfimkbYbn pic.twitter.com/AUEkXAZlmQ 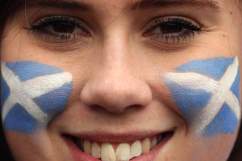 How to Watch the Scottish Independence Vote Results Online