Steven Sotloff has been beheaded by ISIS in the terror group’s second videotaped execution of an American journalist in two weeks.

Sotloff, 31, had been held in captivity by ISIS forces since August 2013, and his life was threatened at the end of the James Foley execution video.

Sources told Reuters the video is authentic. Sotloff family members are aware of the video and are grieving, according to a spokesman.

Since his death it has been revealed that Sotloff was a dual Israeli citizen.

1. Sotloff’s Execution Carries Out a Threat Made by ISIS in the James Foley Video

The video of the Sotloff’s execution begins with a masked man saying, “I’m back, Obama, and I’m back because of you arrogant foreign policy towards the Islamic State … despite our serious warnings.”

The news of the execution of Sotloff came through SITE Intelligence Group, a monitoring agency. In the video the executioner says:

Obama, your foreign policy of intervention in Iraq was supposed to be for preservation of American lives and interests, so why is it that I am paying the price of your interference with my life?

He then adds that as long as missiles “continue to strike our people, our knife will continue to strike the necks of your people.” The video showing the execution was titled “A Second Message to America.” During the clip, Sotloff gives a statement where he condemns US foreign policy.

The setting for the execution is similar to the James Foley video. Like Foley, Sotloff wears an orange jumpsuit while his killer stands over him.

Sotloff had been shown at the end of the James Foley execution video, with a threat that he too would be executed if American bombings on ISIS continued. Watch that video below:

The White House did not immediately confirm the authenticity of the Sotloff video, but a spokesman said “thoughts are prayers are with Mr. Sotloff and Mr. Sotloff’s family.” 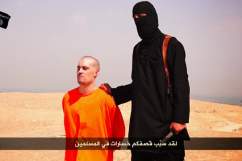 2. The Executioners Have a Third Hostage & Are Threatening to Behead Him

A citizen of the UK, David Cawthorne Haines, is seen at the end of the video, similar to how Sotloff was shown in the James Foley video. The executioner promises that Haines will be executed next if U.S. policy in the region continues. 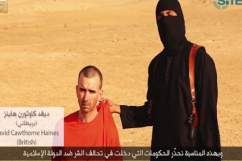 Sotloff’s mom, Shirley, made a passionate plea to the ISIS leadership, begging for them to release her son last week in the wake of the Foley video. In the heartbreaking video, which you can view above, Shirley Sotloff directly addresses ISIS leader Abu Bakr al-Baghdadi.

Prior to Sotloff’s appearance in the Foley video, the Sotloff family had been warned not to go public with news of his kidnapping, fearing for his safety. CNN reports that despite the public blackout on information, his family and several government agencies had been working to secure his release.

After the Foley execution video was seen worldwide, the Sotloff family started a White House petition asking for him to be rescued. 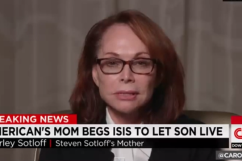 4. Sotloff Was a Reporter for Time Magazine & a Champion of Islamic Culture

Sotloff, who hailed from the Miami area, had written for respected outlets like Time magazine and had appeared on Fox News and CNN.

Sotloff was a lover of Islamic culture and had been based in Libya for much of his career. On his LinkedIn page, Sotloff says that he was a graduate of the University of Florida.

After graduating college, Sotloff began studying Arabic, and throughout his career had worked in Yemen, Saudi Arabia, Qatar, Turkey and Syria.

You can read a collection of his work for Time here. 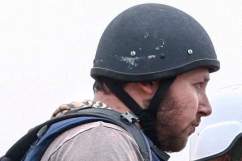 5. His Death Comes in the Wake of More U.S. Bombing

Just 24 hours before the Sotloff video was uploaded, U.S. jets bombed near the Mosul Dam in Iraq. The dam was being held by ISIS members. A military statement about the bombing said:

The strikes destroyed three ISIL trucks, severely damaged another, destroyed an ISIL armed vehicle, and destroyed a mortar position near the Mosul Dam.

The executioner in the video references Mosul.

During the U.S. bombing campaign on ISIS there have been 123 separate strikes.

Loading more stories
wpDiscuz
12
0
Would love your thoughts, please comment.x
()
x
| Reply
Steven Sotloff, the U.S. journalist held captive by ISIS, has been beheaded. He had been shown at the end of the James Foley execution video, and ISIS had promised that if U.S. bombing continued in the region, Sotloff would be killed.