Thanks to a highlight reel diving save, from Nationals Outfielder Steven Souza Jr., Nats pitcher Jordan Zimmerman threw the team’s first no hitter.

1. He Saved the First No Hitter in Nationals History

Souza, 25 and a defensive replacement, was able to secure Jordan Zimmerman’s first no hitter for the Washington Nationals in the team’s history.

Souza, who took over for Ryan Zimmerman in the 9th inning for the Nationals vs. Marlins, was able to make a spectacular, diving save, allowing the Nationals to win 1-0 over the Marlins.

Souza has switched between playing in the majors and minor league throughout the 2014 season. 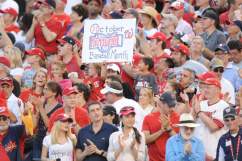 Souza was a third round draft for the Nationals, out of Cascade High School in Everette, Washington. He was signed for $346,000.

Souza received a 50 game suspensions in 2010, along with a teammate, after testing positive for Methylphenidate and Ritalinic Acid, PEDs that violated the Minor League Drug Prevention and Treatment Program.

At the time of his suspension, Souza was batting .231 with 11 homers, 56 RBIs and 18 stolen bases in 81 games. Souza was playing for the Class A Hagerstown Suns.

4. Souza Is The International League 2014 MVP

Souza also lead the International League in batting average with .354, on-base percentage at .435 and slugging percentage with .601.

5. He’s Only Played in 21 Major League Games This Season

Proud to be apart of this team and lucky to have watched it. Had a blast celebrating tonight! pic.twitter.com/QLcDPtVbl9

And here are his career statistics: