T.J. Lane has been captured after an aggressive search conducted by local, county and state police. He was captured at 1:20 a.m. local time by the Ohio State Highway Patrol.

We are confirming that Thomas Michael "TJ" Lane III is in custody. He has been returned to the prison. #TJLane

Cleveland.com reports that Lane made it just 100 yards after scaling a prison fence and was caught five hours later.

His fellow escapees are also back in custody.

The Highway Patrol used its airplane and helicopter in the search and said infrared technology helped locate the prisoners.

Below you can watch a press conference announcing the capture, held by police in Chardon, Ohio, where Lane killed three high school students in 2012. Chardon is about three hours from the prison, located in Lima, Ohio.

And here’s the press conference held outside the prison, with comments from the warden and police officials involved in the search:

T.J. Lane is the school shooter who took three lives of students and injured three more at Chardon High School in Ohio in 2012.

In March 2013 he was sentenced to three life sentences in prison without parole.

On September 11 he escaped from prison at the Allen Correctional Institution in Lima, Ohio.

1. He Escaped With 2 Other Inmates

(Ohio Department of Rehabilitation and Correction)

Lane escaped the Allen Correctional Institution with two other inmates at 7:45 p.m. on Thursday, September 11.

One of the inmates was captured, but Lane and Clifford Opperud, 45, remain at large.

2. They Are Considered Dangerous but Unarmed

The duo is considered dangerous, but authorities do not believe them to be armed.

Opperud is serving a sentence for aggravated robbery, burglary, and kidnapping.

3. A Search Is Under Way

Lima police Sgt. Andy Green said a search was underway in woods and a residential area near the prison, about 80 miles south of Toledo.

The search involves state, county and local police and includes the state police helicopter and airplane.

4. His Victim’s Families Are Worried

I’m disgusted that it happened. I’m extremely scared and panic stricken. I can’t believe it.

5. He Suffers From Mental Illness

Often remembered as the school shooter who wore a shirt with the word “killer” written on it to his sentencing, Lanes’ court case was fraught with requests for stays and additional time for reasons of mental illness.

However, insanity pleas are rarely accepted in Ohio, and while Lanes does suffer from auditory and visual hallucinations, his attorneys were unable to prove that this is what caused him to commit his crime.

He was sentenced to life without parole.

A police report said Lane admitted firing 10 shots from a .22-caliber semiautomatic Ruger handgun, a weapon he told authorities he had obtained from an uncle’s home the night before the shooting. Demetrius Hewlin, 16; Russell King Jr., 17; and Daniel Parmertor, 16; were killed. 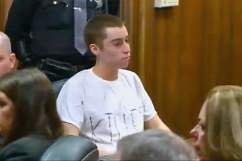