Ty Hoffman has been arrested in Shakopee, Minnesota, exactly one month after the murder of Kelly Phillips in Arden Hills on August 11, according to local police. Hoffman and Phillips were the co-founders of the Lush Food Bar. The men were also former lovers.

1. The Reward for Hoffman’s Capture Had Just Been Increased

A reward of $40,000 had been offered for his capture. Hoffman was found in Shakopee, Minnesota, about 40 minutes from the murder scene in Arden Hills. He was arrested “without incident.”

2. There Were Numerous Sightings of Him Close to a Casino

He was suspected of being in the area around the Mystic Lake Casino in Prior Lake, Minnesota. Hoffman was spotted numerous times there. He was said to have been involving in gay communities and was known for often clearing his throat. According to My Fox Twin Cities, Hoffman was arrested outside of an Arby’s.

3. He’s Suspected of Robbing a Bank While on the Run

Police believe that Hoffman murdered Phillips and then robbed a TCF bank in Blaine, Minnesota.

This is Ty Hoffman, the suspect police are looking for in the murder of Kelly Phillips. Call police with info #wcco pic.twitter.com/s1xDtJV7Tg

He was known for his love of gambling and Starbucks. Investigators also said that Hoffman loved to sit and watch move-after-movie at theaters.

5. He’s Accused of Leaving Phillips For Dead at a Gas Station

It’s reported that Hoffman allegedly killed Phillips at the Holiday gas station. The two were in an argument, and as Phillips tried to leave, he was shot in the back. The two had arrived in the same car, a dark BMW.

Phillips’ fiance made a statement about the murder on August 27:

My name is Nathon Bailey and as difficult and painful as it is for me to be here talking to the public like this, I know it’s a necessity. Kelly Phillips and I were engaged to be married this Saturday. Instead, I’ve lost the love of my life and my best friend. The community is also at a loss, too. We’ve lost a leader, a brother, a son, a co-worker and dear, dear friend to so many. I feel it by the outpouring of support and love from all of my family and friends and even from people I hadn’t met before all of this and for that I am very grateful.

Although we have a loss, we must not be defeated. Kelly’s friends and family and I are determined to find justice and peace. And with your help, we can and we will achieve this. We need you to be aware and active in the search for Kelly’s killer. Kelly’s friends and I are determined. If you know something, please, I beg of you, please step forward. If you see something, please step forward and contact the authorities right away.

We need you to not forget how Kelly was taken from us so abruptly. If you loved Kelly or loved what he stood for, we would like to welcome you to join us right here at St. Mark’s Cathedral tomorrow evening, Thursday, at 7 p.m. for a memorial service in his honor. Help us as we grieve the loss of Kelly. Help us as we achieve justice. Help us remember a man who changed my life for the better and changed the world around him for the better.

More than anything I would love it if everybody could be inspired by Kelly, by how Kelly lived his life. Be kind, be gentle, be giving, and care for the person next to you more than you care about yourself. That’s what Kelly did and that’s what we loved and honored about him so very much. Thank you. 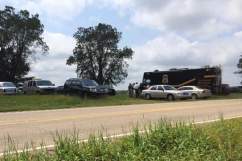