The only team that can stop the United States is the United States. Team USA crushed Lithuania on Thursday to earn its second straight trip to the finals of the FIBA World Cup. With Spain eliminated from the tournament, the Americans will play France or Serbia in the Gold Medal game Sunday.

And barring a colossal meltdown, the United States will win the Gold after a thrashing of the Lithuanians on Thursday.

Click the link below to view photo gallery of the game, click here for a full box score and read on for a recap and highlights roundup. 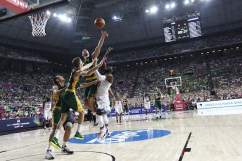 USA vs. Lithuania Photos: The Pictures You Need to See

The United States Blew it Wide Open in the 3rd Quarter

Here’s a look at the stats for each team through three.

It wasn’t a total waste of time for Lithuania’s fans to come out to the game, though. At least they had a good opportunity to play Patty Cake.

Lithuania Hung Around in the 2nd Quarter

The United States had all the momentum heading into the second quarter, but the Lithuanians wouldn’t go quietly. Team USA outscored Lithuania just 22-19 in the quarter and was clinging onto a 43-35 lead at the half.

Here’s a look at the first-half stats:

The quarter included what could have been an ugly scene between the United States’ DeMarcus Cousins and Lithuania’s Jonas Valanciunas.

Valanciunas was boxing out Cousins when he elbowed Cousins in the elbow. Cousins took exception and wound up as if to throw a punch before thinking better of it. Valanciunas, for his part, appeared to brace for being hit.

Cousins was assessed a technical foul on the play.

With three starters on the bench after picking up their second fouls, Team USA was trailing by 3 mid-way through the first quarter. But Kyrie Irving’s 3 ignited an 8-0 run to give the Americans an 18-13 lead, and the U.S. led 21-16 at the end of the quarter.

Klay Thompson scored 8 points off the bench to lead all scorers in the quarter.

Three of @usabasketball‘s five starters are now on the bench with two fouls, as @KennethFaried35 picks up his second.

Steph Curry and James Harden — the United States’ two starting guards — picked up two fouls each in the game’s first 3 minutes as the U.S. and Lithuania traded baskets, and Kenneth Faried picked up his second a minute later.

Derek Rose came into the game to replace Curry with just under 7 minutes left.

The United States didn’t lead until a Klay Thompson 3-pointer made it 10-9 with 6:26 left.

United We Stand. Good luck to the #USABMNT in the #Spain2014 Semifinals! pic.twitter.com/Rf6rDaNiN1

As is the case with all sporting events today, athletes are taking the court or field thinking of the memory of those who lost their lives in the September 11 terrorist attacks 13 years ago.

As Klay Thompson tweeted, Team USA has the special privilege of representing the Stars and Stripes in international competition. 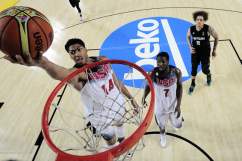