The United States has cruised past every opponent so far in the FIBA World Cup, and Tuesday’s quarterfinal game against Slovenia was no different.

The Americans shrugged off a slugging first half and bludgeoned the Slovenians in the second en route to a 119-76 win and a trip in the semifinals, in which they’ll take on Lithuania.

Check out the full box score here from ESPN.

The United States Scored 70 Points in the 2nd Half

After a lackluster second quarter left the Americans with a meager 49-42 halftime lead, the Americans played their best offensive half of the summer, outscoring Slovenia 70-34 in the second half and turning this into one of the biggest blowouts of the tournament.

Klay Thompson isn’t the most talented player on the Americans’ roster, but he’s been a consistent scorer thought. Tuesday, he scored a game-high 20 points off the bench on 4-for-8 3-point shooting.

Kenneth Faried (10 rebounds) and James Harden had 14 apiece and Anthony Davis had 13 points and a team-high 11 rebounds for Team USA, which out-rebounded the Slovenians 54-38.

Team USA Led by Only 7 at the Half

Team USA leads Slovenia 49-42 at halftime. Lost their mojo when K.Faried sat out most of second quarter. Head scratcher.

Playing against a team that the United States slaughtered in an exhibition game in the Canary Islands, the United States played a listless second quarter in which the teams were tied at 20, allowing the Slovenians to hang around and trail only 49-42 at the break.

As reporter Chris Sheridan pointed out, the Americans’ struggles coincided with Kenneth Faried — one of the team’s best players throughout the tournament — spending much of the quarter on the bench. 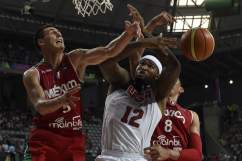 USA vs. Mexico Photos: The Pictures You Need to See

Loading more stories
wpDiscuz
0
0
Would love your thoughts, please comment.x
()
x
| Reply
The United States basketball team takes on Slovenia in the quarterfinals of the FIBA World Cup. Keep it here for updates and highlights.