Despite starting off the season with two wins, UCLA has dropped over five spots in the polls since the beginning of the season. Voters have been less than impressed with close victories over Virginia and Memphis.

But on Saturday, the challenges will pick up for the Bruins, as they travel to Arlington, Tex., to face the Texas Longhorns at Cowboys Stadium.

TV: FOX has the telecast at 8 p.m. Eastern time.

With UCLA playing games against high-powered Arizona State, Utah and Oregon to open the Pac-12 schedule, after this week’s trip to face Texas (1-1) Saturday, the Bruins can’t overlook a Longhorns team that is looking to bounce back from a 41-7 defeat at the hands of BYU last week.

Another immediate challenge for UCLA comes from the Longhorns’ dual-threat quarterback, Tyrone Swoopes, a redshirt freshman listed at 6-foot-4 and 245 pounds. Jack played with Swoopes in a high school all-star game in 2013 and is well aware of what he can do.

Swoopes was 20 of 31 for 176 yards with one touchdown and one interception in his first career start last Saturday as BYU demolished Texas 41-7 in Austin.

In his second career start, Swoopes should play a more impressive game than he did in his debut last week against BYU. But UCLA has too much athleticism. 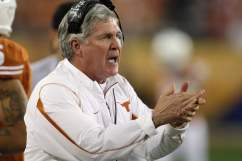 Mack Brown Steps Down as Texas Coach? 5 Fast Facts You Need to Know

Loading more stories
wpDiscuz
0
0
Would love your thoughts, please comment.x
()
x
| Reply
The Bruins and Longhorns meet in Arlington with both teams looking to prove something.