The United States blew out the Dominican Republic in an exhibition game last month at Madison Square Garden. Wednesday, the Americans are hoping to replicate the result.

Team USA takes on the Dominicans Wednesday in its fourth game of FIBA World Cup group play in Bilbao, Spain.

The game is a rematch of an August 20 exhibition at Madison Square Garden that the United States won in a 105-62 rout.

The Dominicans are 2-1 in Group C, tied for second place in the group and a game behind the U.S., which is 3-0. The team is loaded with players who played collegiately in the United States, including former Louisville star Francisco Garcia, who now plays for the Houston Rockets.

Orlando Antigua, who coached on John Calipari’s staffs at Memphis and Kentucky for the past six years and was recently named the head coach at South Florida, is the Dominicans’ coach.


The Dominicans have played well so far in the tournament and have a good chance to be one of the four teams in Group C to advance out of group play. They’re well-coached and have more athleticism than most teams. They’re good enough to keep this close for a while, and we like their chances to make the game more competitive than last month’s exhibition.

But as has been the case in every other U.S. game this summer, the Americans will win comfortably. 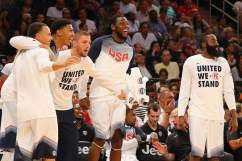 Loading more stories
wpDiscuz
0
0
Would love your thoughts, please comment.x
()
x
| Reply
The United States basketball team looks to win its fourth straight game in the World Cup when it plays the Dominican Republic Wednesday. Here's how to watch.