ISIS released a video Friday purporting to show the beheading of British prisoner Alan Henning and claiming that American Peter Edward Kassig will be next.

Henning, a 47-year-old father of two affectionately known by his friends as “Gadget” because of his love for technology, is the fourth Western hostage the group claims to have executed.

The executioner appears have been the so-called Jihadi John.

1. An ISIS Court Found Henning Innocent of Spying, But He Was Executed Anyway

The terrorist group uploaded another video showing the beheading, calling it “Another Message to America and Its Allies.”

The Guardian reports that Henning had been found innocent of spying in an ISIS court but was executed nonetheless. It was thought that Henning was being held in the area around Raqqa in Syria.

Shortly before the video was uploaded, a video emerged of an ISIS fighter appearing to goad the US into a ground invasion. 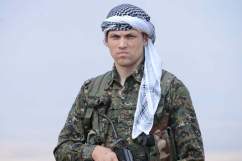 2. Henning Was Kidnapped the Day After Christmas in 2013

Alan Henning was a cab driver from Salford in north west England. He was in Syria doing charity work to help poor people in the region affected by the civil war. On December 26, 2013, it’s believed he was kidnapped by terrorists after crossing the border from Turkey into Syria. He was taken in the region of al Dana, close to Aleppo in Syria, shown here:

Sky News reports that he had been on a mission, driving an ambulance full of aid, on a 4,000 mile journey. It was something he felt was “all worthwhile” so that the aid would get to where it was needed most.

The Manchester Evening News reports that Henning was involved in the English-based charity Al-Fatiha Global.

Video emerged in September of Henning just before he about to cross the border into Syria on an aid mission.

3. His Wife Begged ISIS to Release Him Just This Week

His death comes after fresh pleas from his wife to spare his life. You can hear his family’s statement begging for his release here:

In a tearful plea, Barbara Henning said: “I ask Islamic State please release him, we need him back home.”

4. Britain Continues to Pound ISIS From the Air

This week, the British Air Force began serious bombing raids against ISIS strongholds in Iraq. In the execution video of Briton David Haines, the English-accented executioner told the world his action’s were due because of Britain’s support of Kurdish rebels.

The day before Henning’s execution, the Guardian reported that British jets had hit ISIS targets hard in the north-west region of Iraq. Alan Henning’s brother-in-law, Colin Livesey, said that the family feared Henning would be moved as the bombing campaigns were stepped up.

The fact Alan Henning was taken hostage when trying to help others and now murdered shows there are no limits to the depravity of IS. 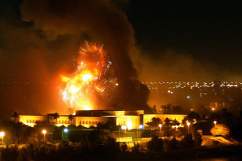 US Airstrikes on ISIS: The Videos You Need to See

The video shows a man ISIS claims is former American Army Ranger Peter Edward Kassig, with the executioner telling President Obama that if the U.S.-led air strikes on ISIS continue, the terrorists will retaliate by executing Kassig.

Kassig, an Indiana native who attended Butler University in Indianapolis, served as a Ranger in Iraq in 2007. He later returned to the region to work in a hospital and deliver humanitarian aid to Syrian refugees. 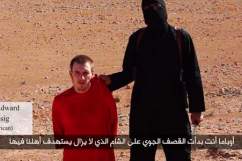