Alison Lundergan Grimes is trying to do something that by most accounts should be nearly impossible. She’s trying to win a state-wide race in bright-red Kentucky at a time when voters across the country are fleeing from Democrats, endangering the party’s majority in the Senate.

A Democrat hasn’t won a state-wide election for federal office in the Bluegrass State since President Bill Clinton in 1996, and the state has moved sharply to the political right since Clinton narrowly carried the state over Bob Dole.

Yet despite the unfavorable terrain and an often-evasive campaign that has drawn ridicule from the national media, Grimes, the state’s Secretary of State, is in a tight race against Senate Minority Leader Mitch McConnell, a five-term incumbent who’s poised to become Senate Majority Leader if the GOP picks up the net gain of six seats it needs to take back the majority for the first time since 2006.

Here’s what you need to know about Grimes and her campaign.

1. She Ousted the Incumbent Secretary of State in a Primary in 2011

Grimes was elected secretary of state in 2011, when she defeated incumbent Elaine Walker in the Democratic primary and then beat Republican Bill Johnson in the general election.

Grimes, a business attorney with the Lexington-based firm Stoll Keenon Ogden, had initially declared her candidacy for the race when the office was held by Republican Trey Grayson. But when Grayson left the post to take a job at Harvard, Democratic Governor Steve Beshear appointed Walker, then the mayor of Bowling Green, to fill out the remainder of Grayson’s term.

Grimes stayed in the race even when Walker declared her candidacy for a full term, and as the Lexington Herald-Leader reported, a split emerged between Beshear’s camp and a host of prominent Democrats who supported Grimes:

Beshear pushed Walker in automated calls on the eve of Tuesday’s election and appeared with Walker in mailed advertisements.

But Beshear’s support may not have been enough to counter Grimes’ substantial campaign war chest. Grimes outraised Walker nearly 3 to 1. The latest report shows Grimes raised $378,660 compared with Walker’s $123,945.

Grimes, whose father, Jerry Lundergan, is a former chairman of the state Democratic Party, was also backed by a “who’s who” of the Democratic Party, including House Speaker Greg Stumbo, U.S. Rep Ben Chandler and Attorney General Jack Conway. And former Gov. Martha Layne Collins spoke in automated calls for Grimes on Monday night.

You can hear Grimes talk about her tenure as secretary of state in the video above.

2. Her Dad, Jerry Lundergan, Is a Former State Party Chairman & a Friend of Bill Clinton

Jerry Lundergan looks on as his daughter, Alison Lundergan Grimes, speaks at the 2013 opening of her campaign headquarters. (Getty)

When Grimes was growing up, her dad ran a catering company that served events including the Kentucky Derby, the Indianapolis 500 and even Pope John Paul II’s trip to the United States in 1986. Grimes and her four sisters all worked for the company at one point or another, according to a 2013 profile in the Louisville Courier-Journal.

Lundergan’s role in the campaign brings with it plenty of benefits. He’s widely respected for his connections to donors — a major reason Grimes’ campaign has shattered fundraising records — and his closeness with the Clintons has paved the way for both Bill and Hillary Clinton to make trips to the Blue Grass State to campaign for Grimes.

But his career hasn’t been controversy-free. According to the Courier-Journal, in 1987, Lundergan was convicted of a felony for accepting what authorities said was a no-bid contract to cater a state economic development event in Louisville — a violation of state law, which prohibits no-bid contracts from going to state representatives.

The conviction prompted Lundergan to resign as both state party chairman and state representative, but it was later overruled on appeal when an appellate judge ruled that Lundergan should have been charged with a misdemeanor rather than a felony. By that time, the statute of limitations on the charges had expired, and Lundergan was never prosecuted again.

Lundergan began his second stint as state party chairman in 2004 and helped lead the party to significant gains in the 2006 elections.

3. Her Husband, Andrew, Is a Professor at the University of Kentucky

Alison Lundergan Grimes and her husband, Andrew Grimes, during an event October 15 in Louisville. (Getty)

Grimes lives in Lexington with her husband, Andrew, a businessman and professor who teaches management at the University of Kentucky.

If his page on RateMyProfessors.com is any indication, Grimes is a pretty good professor. He has a score of 5 out of 5 for overall quality and even a hot pepper icon signifying his “hotness” factor is an asset.

Here’s what one student wrote about him:

Andrew Grimes was easily in my top 3 professors that I had at UK. He is a boss in real life, is married to the secretary of state, and is still young enough to connect with college students. The insights that he gives as far as how to be successful in the professional world are invaluable. Definitely take him if you can.

4. She’s Been Mocked & Ridiculed for Refusing to Admit She Voted for President Obama

Throughout the campaign, Grimes has bent over backwards to distance herself from President Obama, whose approval rating in Kentucky is under 30 percent and who lost the Bluegrass State badly in 2008 and 2012.

The McConnell campaign has done everything it can to seize on Obama’s lack of popularity, running ad after ad that describes Grimes as “Obama’s candidate” and forcing Grimes to remind voters repeatedly that Obama is not on the ballot on Election Day.

Grimes has gotten by for the most part by vowing to be an independent voice and by making mostly vague references to Obama’s “War on Coal.” But things got really awkward — and, in the eyes of most pundits, embarrassing — when Grimes refused to say during an interview with the Courier-Journal editorial board that she had voted for Obama. Watch the video above.

Grimes is a lifelong Democrat who served as an Obama delegate at the party’s 2012 convention in Charlotte. There are few if any people on the planet who think she voted for John McCain in 2008 or Mitt Romney in 2012, yet when members of the C-J’s editorial board pressed her on the matter, she resorted to saying she hoped the board would respect the “sanctity of the ballot box.”

Chuck Todd, the host of NBC’s Meet the Press, delivered the most widely reported piece of criticism the next day, when he said on MSNBC’s Morning Joe that Grimes had “disqualified herself” — a line that almost immediately made its way into the McConnell camp’s messaging.

Grimes then repeated the line about the “sanctity of the ballot box” in a debate with McConnell.

5. She’s Kept the Race Close, but McConnell Is Still a Solid Favorite

Alison Grimes and Mitch McConnell square off in a debate October 13 in the Lexington studios of KET Network. (Getty)

Grimes has consistently out-performed what analysts call the “fundamentals” of the state, which has developed a strong Republican lean in federal elections despite Democrats’ controlling the governor’s mansion and the state legislature.

As FiveThirtyEight’s Harry Enten points out, it’s almost unprecedented for a candidate in Grimes’ position — a member of the president’s party challenging an incumbent senator in a state that voted against the president in the most recent election. Yet polling has continued to show a close race that will likely be decided by single digits, and though McConnell has led in the majority of public polling over the past month, a Survey USA poll released this week showed McConnell leading by only one percentage point — well within the margin of error.

Still, because of the state’s Republican lean and McConnell’s slight but consistent advantage in the polls, the FiveThirtyEight forecast gives Grimes just a 22 percent chance to unseat McConnell.

A Grimes upset is still plausible, but it’s getting less so by the day. 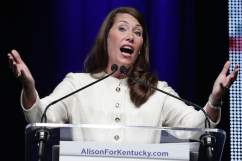