The Antares rocket has exploded on its launchpad in eastern Virginia. The rocket exploded just after being given the go-for launched at 6:22 p.m. Eastern time from the Wallops Flight Facility.

1. Just Prior to Launch at Wallops Island, NASA Said There Were ‘No Issues’

The launch was scheduled 6:22 p.m. Just after 6 p.m., NASA tweeted that there “no issues” with the scheduled launch.

2. NASA Says There’s Been ‘No Indicated Loss of Life’

The ship was unmanned and was taking 5,000 pounds of supplies to the International Space Station. CNN reports NASA spokesman Jay Bolden saying, “There was a failure on launch. There was no indicated loss of life. There was significant property and vehicle damage. Mission control is trying to assess what went wrong.” After the explosion, the NASA visitor’s center had to be evacuated.

Later NASA confirmed that nobody had been hurt in the explosion.

3. This Rocket Is Privately Owned by Orbital Sciences

The ship was owned and developed by Virginia based-Orbital Sciences. The company detailed the payload of this failed mission and notes that it was the first use of the “upgraded Castor 30XL second stage motor, which enables greater lift capacity for this and future missions”:

For Orbital’s fourth mission to the space station, which includes the 2013 full demonstration mission, the Cygnus spacecraft is carrying 5,050 pounds (2,290 kilograms) of supplies to the Space Station, including science experiments to expand the research capability of the Expedition 41 crew members aboard the orbiting laboratory, along with crew provisions, spare parts and experiment hardware. This mission will also feature Orbital’s first use of the upgraded Castor® 30XL second stage motor, which enables greater lift capacity for this and future missions.

4. Antares Was Supposed to Launch the Day Before the Explosion

It was originally supposed to launch on October 27, according to Space.com. It didn’t take off because of a boat was stuck in the Range safety area.

5. The Rocket’s Owners Have a $1.9 Billion Deal With NASA

Orbital Sciences has a $1.9 billion deal with NASA. Under its $1.9 billion cargo-carrying contract with NASA, Orbital Sciences “Orbital will use Antares and Cygnus to deliver up to 44,000 pounds (20,000 kilograms) of cargo to the ISS over eight missions through 2016. For each mission, NASA will manifest a variety of essential items based on ISS program needs, including food, clothing, crew supplies, spare parts and equipment, and scientific experiments,” according to a press release from the company. 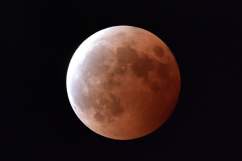 Read More
5 Fast Facts, Breaking News, NASA, Space
The Antares rocket exploded on a launchpad in the NASA facility in eastern Virginia. The ship was bringing 5,000 pounds of supplies to the International Space Station.