The American journalist diagnosed Thursday with Ebola is the son of a British-born blue blood who married a world-renowned Buddhist monk when she was 16 and is now married to the journalist’s birth father, a prominent Rhode Island doctor.

Ashoka Mukpo, a 33-year-old freelancer who had just joined an NBC crew in Liberia, was diagnosed with the virus Thursday and will be flown back to the United States for treatment on Sunday. He was working with NBC chief medical correspondent Dr. Nancy Snyderman .

Mukpo had been working in West Africa for the past several years and had come to Liberia to help spread word of the growing crisis.

His diagnosis comes as officials in Dallas are scrambling to ensure the safety of people who may have come into contact with Thomas Eric Duncan, an Ebola patient who recently arrived in the United States from Liberia.

Read on for more about Mukpo’s diagnosis, background and amazing family.

When NBC News initially reported Mukpo’s diagnosis Thursday night, the network said it was withholding the journalist’s name at the request of his family.

Levy told ABC News that his son had been doing human rights work in west Africa for the past several years. He returned to Liberia when the Ebola outbreak began this summer, he told the network.

“Having lived there for the last several years, Ashoka was well aware of the risks but felt strongly about trying to help provide honest perspective from the ground level,” Mukpo’s father said in a statement published by ABC. “Ashoka is being evacuated to the USA where he will receive the best possible treatment. The doctors are optimistic about his prognosis.”

2. He Recently Posted on Facebook About How ‘Fraught With Danger’ Life Can Be

Mukpo maintained an active Facebook presence while stationed in Liberia, often lamenting the dire situation as the virus spread.

On September 18, he wrote about how “unpredictable and fraught with danger life can be.”

man oh man i have seen some bad things in the last two weeks of my life. how unpredictable and fraught with danger life can be. how in some parts of the world, basic levels of help and assistance that we take for granted completely don’t exist for many people. the raw coldness of deprivation and the potential for true darkness that exists in the human experience. i hope that humanity can figure out how we can take care of each other and our world. simple, soft aspiration for all my brothers and sisters on this earth who suffer the elements and the cold. may we all be free, loved, and tended to…

In addition to his work as a cameraman, Mukpo is a freelance writer who’s work has appeared on the website of Al Jazeera, among other outlets.

His most recent piece was a column posted September 17 and headlined “Message from Liberia: Send help now.”

The West African nation is once again being ravaged by a terrible crisis that is threatening the very fabric of its society. The Ebola epidemic has gone from bad to worse in recent months. Treatment centers set up to isolate and care for Ebola patients are overflowing, leaving the sick and dying to lie on the ground outside the centers in the hope that a bed opens up for them. Over the last few weeks, I have seen young children close to death turned away from crowded centers and heard stories of ill relatives left at home waiting for days to be picked up by ambulances.

3. He’s the ‘Reincarnation of a Tibetan Teacher’

Ashoka Mukpo (center) with his mother, Diana (third from left) and birth father Mitchell Levy (far right) during a visit to Tibet in 2002. (Konchok.org)

Diana’s book, titled Dragon Thunder, chronicles her life with the religious figure. From the description:

At the age of sixteen, Diana Mukpo left school and broke with her upper-class English family to marry Chögyam Trungpa, a young Tibetan lama who would go on to become a major figure in the transmission of Buddhism to the West. In a memoir that is at turns magical, troubling, humorous, and totally out of the ordinary, Diana takes us into her intimate life with one of the most influential and dynamic Buddhist teachers of our time.

Ashoka Mukpo’s biological father, Mitchell Levy, was the personal doctor to Trungpa, who suffered from chronic health issues. Diana had an affair with Levy while married to Trungpa and gave birth to Ashoka in 1981. Trungpa adopted Ashoka as his own and deemed the boy a tulku, the reincarnation of a Buddhist master teacher.

Trungpa died in 1987, according to the book Chogyam Trungpa, His Life and Vision.

Diana Mukpo, owner of the Windhorse Dressage training center in Providence, Rhode Island, has since married Levy, according to Dressage Daily. Levy is director of intensive care at Rhode Island Hospital. 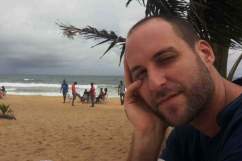 4. He’ll Be Flown Back to the U.S. for Treatment

Tenants sit outside the home in Monrovia, Liberia where Eric Duncan had stayed before being diagnosed with Ebola.

From Turness’ memo to the NBC staff, as reported by NBC:

We are doing everything we can to get him the best care possible. He will be flown back to the United States for treatment at a medical center that is equipped to handle Ebola patients. We are consulting with the CDC, Medicins Sans Frontieres and others. And we are working with Dr. Nancy on the ground in Liberia.

The crew was stationed in the Liberian capital of Monrovia — the same city where Duncan had been staying when he came down with the virus.

The city is on the Atlantic Coast and is by far the biggest in the West African nation. It’s also home to most of the country’s treatment centers and has been at the center of the nation’s efforts to contain the outbreak and care for patients.

BREAKING: NBC identifies photographer diagnosed with ebola as 33 year old Ashoka Mukpo. We found out he is from RHODE ISLAND.

NBC TV in Rhode Island reported that Mukpo is from the Ocean State city of Providence.

The station said that Mukpo’s father is a doctor at a Rhode Island hospital.