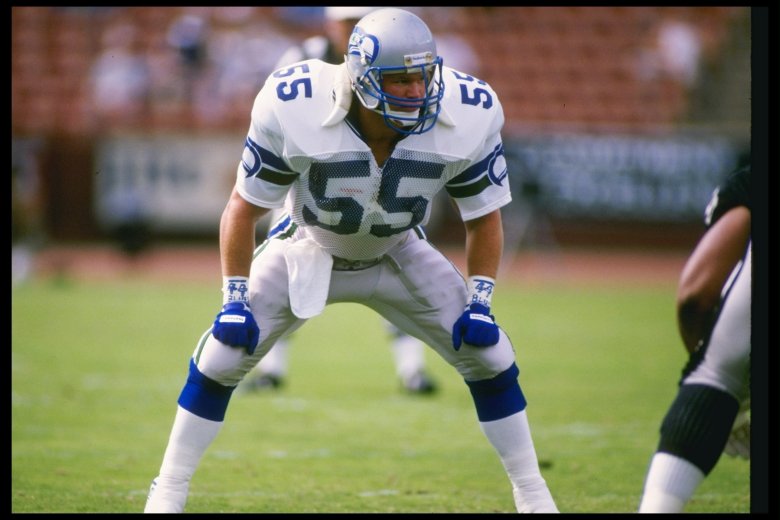 Brian Bosworth is one of the most controversial players to ever put on a set of shoulder pads. Run out of college football for drug use and flushed out of the NFL by injury, the linebacker talked a big game but never really backed it up as a pro.

Following his two-year NFL career, Bosworth, who goes by the nickname “Boz,” became a B-list action movie star appearing in films like “Stone Cold” and the remake of “The Longest Yard.” He also appeared on the TV series “Lawless.”

Bosworth is the subject of the ESPN 30 for 30 documentary “Brian and the Boz” airing Oct. 28 at 9 p.m. ET. Here’s everything you need to know about him.

1. Bosworth Played in College at Oklahoma & He Was Awesome

Bosworth was born in Oklahoma City, attended high school in Texas and returned to Oklahoma to become an all-american linebacker with the Sooners. Bosworth played at Oklahoma from 1984 to 1986, earning all-America status in 1985 and 1986. In his time with the Sooners, he captured the Butkus Award as the nation’s best linebacker in 1985 and 1986 and is the only player in the history of the award to ever win it twice.

At Oklahoma, Boz was a lightning rod for controversy. In addition to being a dominant player for head coach Barry Switzer, Bosworth took aim at the NCAA on more than one occasion. Wearing wild hairstyles and unafraid to speak his mind, Bosworth grated on opponents and in the end, his college career ended in controversy.

2. Bosworth Was Banned From College Football for Steroid Use

Just watch it!! Blessed for my jOUrney!! Worth every moment!!" 7 days until Boz #BATB @espn @30for30 @OU_Football pic.twitter.com/1q6SSMBFtT"

Bosworth admitted to using steroids in 1986 and was banned from playing by the NCAA. He was later dismissed from the Oklahoma football team for his behavior in the aftermath of the suspension. In December 1986, he owned up to his mistakes:

“I accept my punishment,” said the flamboyant 238-pound, 6-foot-2-inch linebacker. But he criticized the application of a rule on steroids by the National Collegiate Athletic Association.

Bosworth, an all-America and two-time winner of the Butkus Award as the nation’s outstanding linebacker, has one year of college eligibility remaining but could also enter next spring’s National Football League draft because he was red-shirted as a freshman. He indicated he was thinking of joining the pros.

The next year, he entered the NFL Supplemental Draft and pursued his professional career.

3. Bosworth Is Among the Biggest NFL Busts

Bosworth was drafted by the Seattle Seahawks in the 1987 Supplemental Draft and signed to a then-monster $11 million contract. He continued to be an outspoken and flamboyant player and drew attention to himself with a variety of stunts and explosive comments. When he made statements his rookie year about how he was going to “contain” Raiders RB Bo Jackson prior to a game against Oakland in 1987, Jackson ran wild for 212 yards and a memorable TD run right over Bosworth. The Bo Jackson blighting personified Bosworth’s NFL career, which flamed out shortly thereafter.

Bosworth was forced to retire from football after only two seasons because of shoulder injuries.

With his football career over, Bosworth took his larger-than-life persona to Hollywood in search of a career in action movies. His first movie, “Stone Cold,” debuted in 1991 to modest reviews. In total, Boz appeared in 13 movies including the remake of the “The Longest Yard” with Adam Sandler in 2005.

Under the handle @GotBoz44, Bosworth has 18K followers and had posted more than 1,000 predictably unfiltered tweets. Boz also had more than 7,000 followers of his Facebook page.

On his candid social media accounts, Bosworth, tinged with regret, makes no secret of how he would live life if given then chance to do it all over again.

The time has arrived to break down the TRUTH No more silence..No more secrets BRIAN vs THE BOZ THIS TIME ITS FOR REAL pic.twitter.com/SqBtOJlsKP

Loading more stories
wpDiscuz
4
0
Would love your thoughts, please comment.x
()
x
| Reply
One of football's all-time great personalities, "The Boz" never lived up to the hype he created and, thanks to one Bo Jackson run, remains one of the great busts in NFL history.