Two people have been killed and several others wounded after a shooting on the street in downtown St. Louis. The attack happened outside the Drury Hotel, close to the St. Louis Cardinals’ stadium, reports KMOV.

1. The Police Response Is Causing Gridlock in St. Louis

A massive police response has blocked up the busy downtown area of St. Louis. A woman who witnessed the attack told the St. Louis Post-Dispatch that she on a bus close to where the shooting happened. After the shots rang out she said she heard somebody shout, “This is for real.” She added that the got off the bus and tried to help one of the victims.

2. The Shooting Happened Close to the City’s Arch

The gunfire broke out at around 2:30 p.m. local time. According to the St. Louis Post-Dispatch, one body could be seen inside of a red Dodge SUV close to the Drury Hotel’s entrance, not far from the city’s famed arch.

3. One of the Victims Died at the Scene

One person was pronounced dead at the scene, another died in hospital. The shooting happened when one car pulled up alongside another, reports KSDK.

4. The Hunt Is on for the Perps

The suspects fled the scene of the shooting, according to Fox St. Louis. The shooting came just hours before the St. Louis Cardinals are due to play the Dodgers in Game 3 of the NLDS.

5. One of the Victims Should Survive

One other person was shot in the ankle and is expected to be okay. The deceased victims have not yet been named. 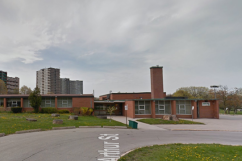