Justin Bourque has been sentenced to five concurrent life sentences for the killing of two Canadian police in Moncton in June 2014, reports CTV News.

1. Prosecutors Wanted Bourque to be Sent Away for 50 Years

According to CTV News, prosecutors had been looking for more than 50 years from a judge in New Brunswick.

The crazed gunman will have no chance of parole for 75 years when Bourque will 99. According to CBC, at sentencing, Chief Justice David Smith called Bourque’s actions, “One of the most horrific crimes in the history of Canada.”

Moncton Mayor George LeBlanc was present for the sentencing.

3. Bourque Told a Friend Before the Shootings That He Wanted to ‘Go Out With a Bang’

4. Bourque’s Facebook Page Was a Treasure Trove of Possible Motives

On his Facebook page, Bourque frequently posted status updates about his pro-gun views and opinions about illuminati conspiracies. Just prior to the rampage, Bourque posted the lyrics to the Megadeath song “Hook in Mouth.”

Moncton residents looked on in horror as the rampage unfolded, and one family posted a graphic video on Facebook of the family witnessing one of the shootings while looking out their window. You can watch the video below. 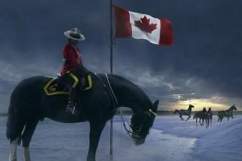 Justin Bourque: The Tweets You Need to Read