Marcel Hamer is the latest African-American teenager at the center of a police violence controversy.

According to New York Magazine, Hamer, 17, was walking home from school in Brooklyn and smoking a cigarette when a plainclothes police officer jumped him and slammed him to ground. The cop incorrectly believed that Hamer was smoking marijuana.

This is unverified, as the recorded footage above begins with Hamer on the floor.

But what happens next is equally alarming.

As Hamer’s friends record the confrontation, the officer yells at Hamer, “Do you wanna get fucked up?” He then turns to Hamer’s friends and says, “Yeah, get it on film.”

A second man, later identified as an undercover officer, runs over to assist the plainclothes officer and handcuff Hamer.

The cops have not been identified by the NYPD.

Hamer himself recently released the YouTube video above, but the incident itself occurred on June 4, 2014. 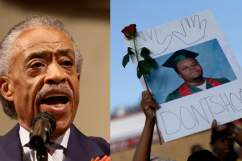