Mark Goldstein has been named as the pilot of the plane that crashed at Wichita’s Mid-Continent Airport on October 30. Multiple people were killed when Goldstein’s plane struck the FlightSafety building at the airport. Goldstein was one of those killed in the fiery wreck.

1. Goldstein Was Trying to Turn the Plane Around When He Crashed Into the Building

According to the FAA, Goldstein was trying to return to the runway after his plane lost power, a minute after take off from the airport. According to Ron Ryan of Ryan International Airlines, who was speaking to KAKE, Goldstein was taking the the plane on a test flight as it had recently been inspected. It was a 1999 King Air B200 Beechcraft plane.

Plane crashed into Flight Safety right across the street from my father-in-law! #Wichita #Kansas @KWCH12 pic.twitter.com/4jxn4c12Ky

2. He Was an Award Winning Air-Traffic Controller

According to his Facebook page, Goldstein had been attending a course close to the FlightSafety building that he crashed into.

3. He Was the Only Person On Board

He was the only person on board the flight which was bound for Mena, Arkansas. He was 53 years old, according to KAKE reporter Susan Peters. He was a resident of Wichita, moving to the area in 1989, reports KAKE.

You can see tail of the aircraft on the rooftop pic.twitter.com/1PlWbcBfey

So far, four people have been confirmed as killed with five people unaccounted for inside the FlightSafety building that collapsed after the crash. Four others are still missing with Wichita’s fire chief telling the media that the structural damage to the building has hampered the rescue effort.

5. Fire Crews Ran Drills for a Disaster Like This on the Previous Day

Fire crews putting out the flames at the airport. (Screengrab via KWCH)

On October 29, the airport tweeted that it was undergoing fire safety training:

If you see smoke from the airfield, our Airport Police & Fire is conducting fire training this morning.

The flames were extinguished by fire crews less than an hour after the crash, according to the Kansas City Star. 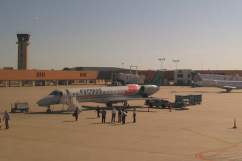 Read More
5 Fast Facts, Breaking News, Death, R.I.P.
Mark Goldstein was the pilot of the plane that crashed at Wichita airport in Kansas. Multiple people were killed after the crash.