Misty Upham has been found dead near the White River in Washington. She was 32 years old.

Misty Upham, who has also appeared in movies such as August: Osage County, was last seen on October 5, leaving her sister’s apartment, in Muckleshoot, Washington. Her family announced that she was missing on the actresses’ Facebook page. Her body was found on October 15.

According to her father, Charles Upham:

As her father I do not fear she committed suicide. I think Misty may have walked into nearby woods and got hurt and can’t reach help or I think she may have had an encounter with someone who may have caused her harm. I believe she would contact us if she could.

I feel that if she is found soon she may have a chance to survive. But time is slipping away.

Charles Upham told KIRO Radio’s “Dori Monson Show” that his daughter was off her meds.

He added in the statement that Upham suffers from bipolar disorder, depression and anxiety. According to KIRO, Upham had been in Muckleshoot to look after Charles after he suffered a stroke. KIRO reporter Graham Johnson tweeted that a search party of three first found her purse and then a body.

Her body was found along here, at the intersection of Forest Ridge Drive Southeast and Elm Street Southeast in Auburn, Washington, a short distance from where she was last seen on October 5.

KOMO News reports that police had been called Upham’s sister’s apartment several times after receiving calls about someone attempting suicide there.

2. She Was a Member of the Blackfoot Native American Tribe

Muckleshoot is shown here south of Seattle and east of Tacoma. (Google Maps)

Upham, a Native-American from Montana, is a member of the Blackfoot tribe. She moved to the Seattle area when she was 8 years old, according to a profile in the Seattle Times. She said in the profile:

I’m writing my own stuff, because there’s just not quality work out there for the type of actress I am. I want [roles] that a Native American could be that have nothing to do with the fact that I’m Native.

In addition to be a Native-American advocate, Upham was also active with PETA.

3. Her Family & Friends Were Combing the Area Where She Was Last Seen

Barbaric. Little bird I found tied by it's leg on Muckleshoot reservation. pic.twitter.com/I5pWYk1pC7

Her family and friends have been canvassing the area around Muckleshoot in the search for Upham. She was last seen with her hair cut short, a purple sweater, black T-shirt, gray sweatpants and silver tennis shoes. Her phone is white, he added in his statement. Her last tweet came on October 1 (above).

4. In 2008, She Was Nominated for an Independent Spirit Award

Arugably, Upham is best known for her highly acclaimed movie, Frozen River. For her role as Lila Littlewold, she was nominated for the Best Supporting Actress award at the Independent Spirit Awards. She’s also appeared in August: Osage County, Djano Unchained, and the upcoming Cake with Jennifer Anniston.

Her family is certainly concerned about her, and we are, too, but it’s not suspicious.

Speaking to KIRO Radio’s “Dori Monson Show”, Charles Upham expressed his outrage that at the police assumption. He said:

It wasn’t like she just decided to take time off. She’s out there, she’s missing, she needs help, she needs her medication…
She has said suicidal things in the past, but never followed through. She don’t believe in killing herself. She believe it’s a sin and she would never do that. 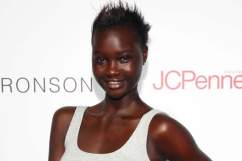