Mitch McConnell has a good chance to become Senate Majority Leader in November. But in order to do that, he’ll first have to fend off a challenge for his seat from Democrat Alison Lundergan Grimes, who’s waged a competitive race and was even ahead by 2 percentage points in one recent poll.

Here’s what you need to know about the candidate fighting to continue his Senate career:

McConnell (right) served as a staff assistant to Senator Marlow Cook from 1968 to 1970 (Wikimedia – http://en.wikipedia.org/wiki/Mitch_McConnell)

McConnell was first elected to the Senate in 1984, running against two-term Democrat Walter Lee Huddleston. He won by a narrow margin, becoming the first Republican to win a state race in Kentucky in 16 years.

McConnell has been re-elected four times, fending off Democratic opponents even in 1996, when Kentucky went blue for Bill Clinton.

“McConnell is widely credited as chief mastermind behind a Republican ascendancy in Kentucky, where the GOP holds both U.S. Senate seats, four of six congressional seats and controls the state Senate.”

After twice being elected as Majority Whip, McConnell was elected Senate Minority Leader in 2006. His predecessor Bill Frist, who was Majority Leader, did not seek re-election.

Since election to the position, his Democratic counterpart and Majority Leader has been Senator Harry Reid of Nevada.

McConnell also serves as a senior member of the Appropriations, Agriculture and Rules Committees.

He graduated from University of Louisville with a B.A. in Political Science and the university is now home to the McConnell Center. He continues to be a ‘rabid fan‘ of their sports teams, though he claims to also support UK.

Mitch McConnell and his wife, Elaine Chao, at a campaign rally in May. (Getty)

McConnell was first married to Sherill Redmon, who went on to be a feminist scholar at Smith College in Massachusetts, and with whom he has three daughters, Elly, Claire, and Porter. She is not mentioned in his Senate biography or campaign literature.

He married Elaine Chao in 1993. The daughter of Chinese immigrants, she was has been Director of the Peace Corps and President and CEO of the United Way of America. She was the United States Secretary of Labor under President George W. Bush from 2001 to 2009.

McConnell was born on February 20, 1942 in Sheffield, Alabama, to Addison Mitchell McConnell and Julia McConnell. He was diagnosed with polio as a toddler, and his mother performed regular physical therapy to allow him full use of his legs.

He moved to Louisville at 13, and played baseball through high school. He was president of the student council in high school, college, and law school, and interned with Sen. John Sherman Cooper (R-Ky.) during his college years. 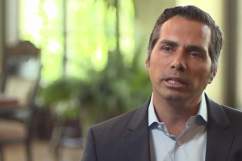 Loading more stories
wpDiscuz
1
0
Would love your thoughts, please comment.x
()
x
| Reply
McConnell is the Senate Minority Leader, and is fighting to save his seat from Democratic challenger Alison Lundergan Grimes in the 2014 Senate elections.