Nancy Snyderman at a conference in Southern California in 2006. (Getty)

Dr. Nancy Snyderman is being flown back to the United States from Liberia after a freelancer working as a cameraman on her crew in Liberia was diagnosed with Ebola.

The announcement came Thursday, when NBC News President Deborah Turness sent a memo to the NBC staff alerting employees of the diagnosis. The cameraman’s family later identified him as 33-year-old Ashoka Mukpo.

1. Snyderman Has Shown no Symptoms of Ebola

Turness said in her memo to NBC staffers that neither Snyderman nor any of the other NBC employees on the crew have shown any symptoms of the virus after the cameraman — who has not been identified — was diagnosed with the virus on Thursday, just two days after he began working with the crew.

2. Snyderman Will Be Flown to the U.S. & Quarantined for 21 Days

Turness said out of an abundance of caution, Snyderman and the other NBC staffers who were working with the infected freelancer will be flown back to the United States and quarantined for 21 days.

We are also taking all possible measures to protect our employees and the general public. The rest of the crew, including Dr. Nancy, are being closely monitored and show no symptoms or warning signs. However, in an abundance of caution, we will fly them back on a private charter flight and then they will place themselves under quarantine in the United States for 21 days – which is at the most conservative end of the spectrum of medical guidance.

3. Snyderman Had Been in Monrovia Reporting on the Ebola Outbreak

Snyderman and her crew had been stationed in the Liberian capital of Monrovia — the same city where Ebola patient Thomas Eric Duncan had been staying before he flew to the United States. Duncan is being treated in Dallas as officials there scramble to ensure the safety of people who may have come into contact with him.

Watch the video above for an interview Snyderman conducted with a leading Liberian Ebola doctor.

4. Snyderman Has Been NBC’s Chief Medical Correspondent for 8 Years

Snyderman has been NBC’s chief medical correspondent since 2006, when she joined the network after 15 years as a correspondent with archrival network ABC. She also previously served as a vice president at Johnson & Johnson and is on the staff of the Department of Otolaryngology-Head and Neck Surgery at the University of Pennsylvania.

5. Snyderman Is Married With 3 Kids

According to her NBC bio, Snyderman and her husband, Doug, live in Princeton, New Jersey with their three children: Kate, Rachel and Charlie. 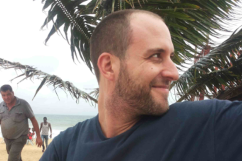 Loading more stories
wpDiscuz
1
0
Would love your thoughts, please comment.x
()
x
| Reply
Dr. Nancy Snyerman, NBC News' chief medical correspondent, is being flown back to the U.S. and quarantined after a cameraman on her crew came down with Ebola.