Multiple people are reported to be wounded in a high school shooting in Washington. Police are on the scene at Pilchuck High School after an active shooter incident.

1. The Seattle Times Tweeted That the Shooter was Dead from a Self-Inflicted Gunshot

Police: A student believed to have opened fire at Marysville-Pilchuck HS is dead from a self-inflicted gunshot wound: http://t.co/1pQTdefFD7

2. A Student Tweeted What He Saw From Inside the Cafeteria

A student within the high school told a local news station on Twitter that the shooter walked up to a table in the cafeteria and shot 4-6 times at the students sitting down.

3. KIRO7 Tweeted a Picture of Students with Their Hands up Being Led out of the School

You just heard @MoniqueKIRO7 explaining kids in this pic are special ed students being led to field with hands up. pic.twitter.com/IYZrT89Nxo

4. A Reporter on the Scene is Tweeting Her Conversation With a Teacher in the School

Just arrived at #Marysville and walking as close as I can get to the high school. Still in touch with teacher inside. @KIRO7Seattle #MPHS

5. Mark Berman of the Washington Post Reported that the FBI Was on the Way 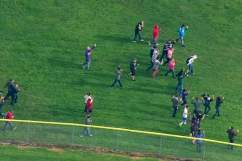