Two people have been shot close to the School of Experiential Education in the Etobicoke neighborhood of Toronto, reports 640 Toronto. The shooting was originally reported to have happened at the school but it actually occurred in front of a close-by apartment complex.

1. The Shooting Didn’t Involve Students, According to the School Board

SHOOTING:Police responding to shooting in the area of Islington Ave and Dixon. Anyone w/ info please call 416-808-2222 MORE DETAILS TO COME

The 911 call came at around 12:40 p.m. on October 6. The two victims are reported to be males in their early-20s or late teens and are not students of any of the nearby schools. A local resident named Michael Snary told The Toronto Star that he was out walking his dog when he saw a bunch of students in school uniforms running around a park near the school, shortly after he heard the gunshots.

Metro News Canada reports that the shooting was the result of a scuffle between a group of men. The paper further reports that three shots were fired in the attack.

2. 2 People Have Been Killed

One of the shooting victims was declared dead at the scene, according to Newstalk 1010.
CTV News reports that the second victim died in hospital.

3. A Lockdown Was in Affect for Other Schools in the Area

ETF on scene after double shooting near Etobicoke school pic.twitter.com/k96b5AwIJV

Nearby schools, including Don Bosco High School, have been locked down. The school is located at 40 McArthur Street in Toronto. The other schools in the lockdown are Kingsview Village Junior School and St. Maurice Catholic School.

4. One Suspect Is in Custody

One man taken into custody at scene of Etobicoke homicide. He was struggling with police officers. Unclear relation. pic.twitter.com/DRQf7qLGmB

The School of Experiential Education is described as a “small alternative high school.” It’s a school that focuses on small class sizes of around 20. 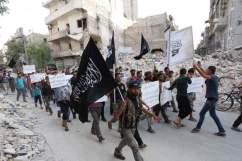