Sean Shaynak was slapped with a 36-count indictment this week, which comes in addition to his indictment last month for allegedly sending a photo of his penis to a 16-year-old girl. That sparked a deeper investigation that led to the new charges, involving six additional girls ages 13 to 19 from 2011 to 2014. He was arrested on September 30 when he appeared for court on the initial charge.

Here’s what you should know about Shaynak and the disturbing allegations.

… according to the investigation, the defendant took a 15-year-old student to a nude beach in New Jersey without her parents’ consent; he performed a sex act on an 18-year-old student without her consent; he sent photos of his genitalia to four students, including two minors; he engaged in consensual sex acts with two students (ages 18 and 19); he inappropriately touched and kissed students and grabbed the buttocks of a minor; he gave alcohol and cigarettes to minors; he requested two minor girls engage in sex with each other. … the defendant is charged with reckless endangerment and menacing for allegedly terrorizing an ex-student with whom he had a prior relationship.

The New York Post reported at the time of his arrest in August 2014, Shaynak told police, “F*ck you, I’m not going anywhere.” That arrest was over a nude selfie that Shaynak is accused of sending to a student.

2. He Allegedly Took a Girl on a ‘Terror Ride’

In court on Tuesday, prosecutor Joseph Mancino described a “terror ride” in which Shaynak drove a female student from Queens to Brooklyn. The New York Daily News reports that the ride ended with the girl escaping his clutches and hiding in bushes. She said she could hear Shaynak banging on his car while looking for her. Mancino told the court: “He threatened to tell her parents.”

In addition to the “terror ride,” he’s accused of taking a student to a sex club and another to a nude beach. In one instance, it’s alleged that Shaynak got a student drunk on vodka until she passed out at his his apartment. The sex that Shaynak engaged in is believed to have occurred after the girls were 17 and thus had reached the age of consent. Though, one charge accuses him of forcing himself on a female student.

3. He Allegedly Gave Perfect Grades in Return for Sex

Brooklyn prosecutor Joseph Mancino told a court in Kings County, via the New York Post, that Shaynak “would routinely give [one teen] 100s in his class even though she turned in work with no answers.” Mancino added that Shaynak, who regularly wore a bow-tie to class, would “groom” his students. A junior at Brooklyn Tech, who was a member of Shaynak’s Aerospace Club, told the Post, “He’d always have students come visit him, kids that were not in the club, mostly very good-looking girls, the best-looking girls in our school.”

"Teacher Known as Cool Friend, Until His Arrest" by KIM BARKER and KATE TAYLOR via NYT http://t.co/vCaZOfXFyi pic.twitter.com/igbPa43zk5

In the course of the investigation, carried out by NYPD detectives and FBI agents, officials seized three computers and two phones. Investigators recovered thousands of text messages and hundreds of photos and videos.

Devonte Watson alleges when he was 11, Sean Shaynak beat him up. (Facebook)

The Daily News reports that in 2005, Shaynak was accused of beating up 11-year-old Devonte Watson in Maryland, where Shaynak lived at the time. Watson tells the News:

He literally jumped on top of me. It happened so fast … He was beating me with a closed fist. It was painful … he was really going at it. My face was hurting. Both my eyes were black, bloodshot. My face was swollen, the whole nine yards.

The charges were dismissed, but Watson’s family had a restraining order upheld against Shaynak after the incident. 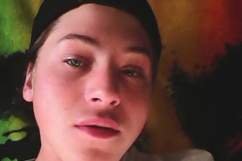