Shoshana Roberts is the woman featured in the viral video showing her constant harassment by catcalls and come-ons during a 10-hour walk through New York City. Roberts, clad in jeans and a crew neck T-shirt, is filmed by a hidden camera amid a litany of unwanted advances, from “Hey, baby” to “What’s up, beautiful?” to “Damn!” The video has exposed this all-too-common treatment of women and sparked heated debate.

Here’s what you need to know about America’s newest feminist icon:

1. Her Video Has More Than 22 Million Views on YouTube

As Roberts walks through the streets of New York over a 10-hour period she is subjected to constant harassment. The walk was edited down to a two-minute viral monster. It was first released on October 29 and now has more than 22 million views. The creepiest segment features a man walking silently right alongside her for more than five minutes. In an interview with The Guardian, Roberts says that she didn’t even show the worst instances of harassment in the video.

2. The Video Has Brought Back Memories of Her Own Sexual Assault

In an interview with The Washington Post, Roberts spoke about her experiences in making the video:

I felt like crying and I have occurrences in my past of sexual assault, so I wasn’t even aware necessarily of all the times people were saying things to me. I was just going over in my head and reliving, unfortunately, these memories while I was walking. I wanted to break down in tears.

She goes on to say:

I called my mom just so I could hear that she loves me and that I was putting myself forward as a face for this cause because it’s something I really believe in and I needed to hear that she was proud of me, which she is.

3. She Has a Black Belt in Taekwondo

A drawback to the video is that Roberts didn’t exhibit her martial arts skills on her harassers. At the 2:35 mark in the BBC interview below, Roberts discusses her martial arts training when asked to describe what she was feeling when the man in the video walked beside her for five minutes. “I was thinking, should I get him in the sternum or the kneecaps?” she said.

Meet the woman from NY street harassment videoSubscribe to BBC News http://www.youtube.com/bbcnews Subscribe to BBC News HERE http://bit.ly/1rbfUog A video director has filmed an actress as she walked the streets of New York City to highlight the harassment women face in the city. In 10 hours Shoshana Roberts was subject to more than 100 catcalls from men she passed. She told the BBC that the sort of behaviour she experienced was not unusual. Check out our website: http://www.bbc.com/news Facebook: http://www.facebook.com/bbcworldnews Twitter: http://www.twitter.com/bbcworld Instagram: http://instagram.com/bbcnews2014-10-30T00:08:07.000Z

My goals right now are about involving my martial arts training with my acting. I started Taekwondo at the Toledo Martial Arts Center when I was 9 and earned a black belt before training in Atemi Jutsu at the Traditional Martial Arts Society in Pittsburgh.

She adds that she has a BA in theater from Kutztown University and “moved to New York immediately after graduating.”

4. A Fox News Idiot Missed the Point of the Video

On an episode of Fox News’ The Five, resident “liberal” Bob Beckel said:

You stay classy, Bob Beckel. You can watch his comments at the 2:40 mark in the video above.

Roberts’ cameraman, Rob Bliss, posted the Beckel video on his Facebook page with the words, “I don’t even…”

5. Roberts Has Been Getting Rape Threats

In the wake of the video, Roberts has been receiving rape threats.

According to an interview with The Washington Post, Rob Bliss, who walked ahead of Roberts and recorded her with a camera concealed in his backpack to create the video, says he’s also been threatened.

I’m getting some blowback, but not nearly as bad as Shoshana. Right now she’s getting a lot of threats and things like that and it’s just so sad. It’s like the video is now being echoed in real life. 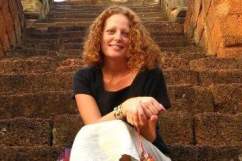