Unarmed black man Akai Gurley was shot dead by a rookie NYPD officer in one of Brooklyn’s most dangerous projects. The shooting happened in the stairwell of the Pink Houses in East New York late on the night of November 20. The cop has been named as Officer Peter Liang. He’s been on the job since January 2013.

NYPD Commissioner Bill Bratton said in a press conference that Officer Liang “accidently discharged” his gun and that Gurley, 28, had been a “total innocent.” According to the Commissioner, Gurley had been visiting his female friend at the Pink Houses at 2724 Linden Blvd and was leaving the building when he encountered Officer Liang in an eighth floor stairwell.

The entrance to the stairwell where Gurley was shot dead. (Screengrab via CBS New York)

The lights in the stairwell have been out for eight days, reports DNA Info. In a report into the shooting by the New York Times, it reads:

Even when the lights are working, the stairwell at the housing projects is so dark at night that anyone standing in it appears as a silhouette, according to residents.

The stairwells are fitted with fluorescent lights, they said, but the burned out bulbs are seldom replaced, and the few that work are dim.

Officer Liang and his partner were doing a top-to-bottom search of the building. When Gurley entered the stairwell with his female friend, 27-year-old Melissa Butler, she told DNA Info what happened in the darkened area of the building:

As soon as he came in, the police opened the [door to the] eighth-floor staircase. They didn’t present themselves or nothing and shot him. They didn’t identify themselves at all. They just shot.

Gurley was shot once in the chest and died after being rushed to Brookdale Hospital. No words were exchanged between Gurley and Liang. Commissioner Bill Bratton described Liang’s discharge as “accidental.” He and Butler had been waiting for the elevator but decided to get the stairs when it never arrived. As they waited in the hallway, Butler had been braiding Gurley’s hair.

2. His Sister Said That ‘Rev Al Sharpton Is Involved Now’

Gurley is survived by his two children. Melissa Butler and Gurley had known each other since 2011, she was not the mother of his kids. Butler’s mother told the New York Post:

She keeps crying. She’s very upset, she saw everything. Police shot him and we don’t know why. He doesn’t carry any firearms. He was just going back home, they were taking the stairs. He’s a nice man. He’s been together with my daughter for four years. He has one daughter, as far as I know.

What’s hitting me on the head right now is how it happened. The mood I’m in is pissed off.

She then posted this heartbreaking tribute to her slain brother:

According to the official website of Al Sharpton’s National Action Network website, on November 23, Pringle, along with the mother of Gurley’s daughter, Kimberly Ballinger, will attend a rally in Harlem.

3. Gurley Was Just About to Start Working for the City

The New York Daily News reports that Gurley lived in the Red Hook section of Brooklyn with his 2-year-old daughter. The News adds that he “was just about to start working for the city.” Charles Barron, a former New York City councilman who has just been elected to the State Assembly, promised that he would fight for answers in the case:

People are outraged, this is happening all over the country, people have no respect for black life. I want to hear the justification for this one. We’re going to fight for justice with this one just like they are in Ferguson.

4. He Was an Aspiring Actor

According to his profile at Explore Talent, Akai was an aspiring actor. He provides little information about himself on the site other than he describes himself as a actor and model. In his photos on the profile, he displays a muscular physique, prior to meeting his girlfriend on the night of his death, Gurley had been in the gym. Some of the little information on the profile says that he’s of Caribbean ethnicity, was 5’11, and is muscular. Speaking to DNA Info, Melissa Butler said:

He was a good person. He was into making music and helping people that were struggling. He would give money if you needed it. He’d give you advice.

According to NYPD Commissioner Bratton, Officer Liang has been place modified duty while the incident is under investigation. The rookie cop graduated from the academy in January 2013, he lives in Brooklyn. Officer Liang was still on probationary status. His partner, Shaun Landau, was also new to the force. Both officers were also taken to the hospital after the shooting to be treated for tinnitus.

“The fatal shooting of this unarmed man is deeply troubling and warrants an immediate, fair and thorough investigation. Many questions must be answered, including whether, as reported, the lights in the hallway were out for a number of days, and how this tragedy actually occurred.” 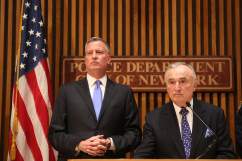