Angela Stoldt allegedly confessed to cops in Florida that in April 2013 she hacked her neighbor to death and then cooked his body. According to cops, Stoldt had been trying to get rid of Jason Sheaffer’s body after she stabbed him in both of his eyes with an ice pick.

The motivation for the murder was, according to cops, that Jason Sheaffer, 36, had been trying to borrow $4,000 from Angela Stoldt’s father, reports the Orlando Sentinel. He came to her home on April 3, 2013. While he was there she served him a cocktail which included some of her father’s prescription drugs. The cocktail made Sheaffer drowsy and confused. The Daytona Beach News-Journal reports that while he drank, Soldt told him that her father was considering lending him the money. She then told him that there were going to her dad’s house, instead she drove him to a cemetery. When he asked her what was going on, the paper reports she told him “How does it feel to be lied to?”

Despite his state, he then threatened to kill Stoldt if she didn’t get him the money, the defendant told investigators. She says he attacked her so she stabbed him in the eye with an ice-pick. That didn’t stop him though, so she had to strangle him with a climbing chord. Before he finally died, Stoldt stabbed him again in the other eye, according to cops. She told investigators:

He starts coming at me and … he didn’t even really hit me, but he scared … me, and I just snapped. He came at me and I stabbed him.

2. One of His Legs Was Cooked in the Oven, the Rest of His Body in Pots

After he was dead, Stoldt says she stored his body in a kiddie pool in her garage. Using a hacksaw, Stoldt says she hacked his body into small pieces. She then began cooking him, his leg was cooked in the oven and the rest of his body was cooked in pots. Quoted in documents that were obtained by the Daytona Beach News Journal, Stoldt said “Thursday is when I was cooking him. Friday is when I was dumping him.” When Stoldt’s daughter complained about the smell of burning flesh, the defendant said that a rat was broiling in the oven. Why that didn’t prompt more questions from her daughter is not elaborated on.

3. She Tried to Use the George Zimmerman Defense

Stoldt’s attorney’s attempted to say that she was acting in self-defense, using Florida’s controversial “Stand Your Ground” law. That was rejected by a judge. She will not face the death penalty in the case. According to documents, when she was first arrested in April 2013, she was charged with “Abuse of a dead human body, tampering with physical evidence and second degree murder.” Those charges have since been upgraded to first degree murder. She is being held without bail at Volusia County Jail.

4. James Sheaffer Was Married With 3 Kids

James Sheaffer was a limo driver. He was married with three kids when he was killed. According to the Orlando Sentinel, he had financial troubles and it was Stoldt’s job to deal with his Social Security disability check. The newspaper says that detectives aren’t saying why she was in charge of his finances. The paper does report that Sheaffer was accused of withdrawing money for personal use from a joint account used by him and his neighbors.

5. Her Son Helped to Dispose of Sheaffer’s Body

While she was hiding Sheaffer’s possessions around assorted locations in Deltona, the Orlando Sentinel reports that she needed help disposing of the body. She got her son, telling him the flesh was from a deer she had killed, to dump the body in the dumpster of a store in New Smyrna Beach, Florida 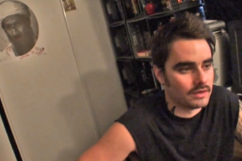 Read More
5 Fast Facts, Breaking News, Crime, Florida, Murder
Follow Heavy ↓
Angela Stoldt is accused of killing James Sheaffer in Florida and then cooking his dead body in her attempt to get rid of the evidence.