This is the shocking video released by police in Philadelphia that shows the moment that Carlesha Freeland-Gaither was kidnapped from the street. She was abducted by a male suspect at around 10 p.m. on November 2. During the struggle with the man, Freeland-Gaither dropped her glasses and cellphone.

According to CNN’s report on the abduction, she kicked out her kidnapper’s passenger side window in her attempts to escape. Her family says that she has an ex-boyfriend who is “obsessed” with her. He lives in Maryland but Carlesha’s family believe he’s tracked her down.

On November 3, her father Carl Freeland, later appeared on Fox News where he begged his daughter’s captor to let her go: 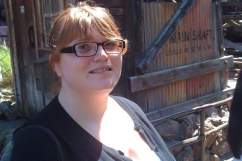 Loading more stories
wpDiscuz
0
0
Would love your thoughts, please comment.x
()
x
| Reply
This is the shocking footage showing a 22-year-old woman being kidnapped on the street in Philadelphia.