One of the breakout star’s of NBC’s The Voice. Delvin Choice was arrested in South Carolina on November 9 on suspicion of driving under the influence.

WYFF reports that Choice was arrested by a South Carolina Highway Patrol trooper close to Greenville around 2 a.m. on November 9. Choice is a native of the area.

He has been booked and charged with DUI. It’s his first offense. Just hours before his arrest, Choice posted the above pic to his Instagram page. Independent Mail reporter Mike Eillis tweeted that Choice was booked at the Oconee County jail at 4 a.m. and released at 10 a.m.

3. Despite the Arrest, His Dad Says ‘Delvin’s Mission Is Still the Same’

We all make mistakes in life. We learn from our mistakes. Delvin’s mission is still the same.

4. Choice Was Hit on The Voice

Choice was one of the most popular figures on season five of The Voice. He made it to the last eight finalists. He was coached by Maroon 5 singer Adam Levine during the show.

5. Hopefully His Arrest Doesn’t Send Him Back to Starbucks

Prior to making it on to The Voice, he worked at a Starbucks. The coffee mega-chain posted a blog about him on their official site and made it clear that even though the company sponsors the show, it has no impact on the judge’s decisions:

Although Starbucks is a sponsor of the show, the company has no influence on the competition. In fact, last year when Choice auditioned for a spot on “The Voice” none of the musical celebrities turned their chairs indicating they wanted to coach him. He did not advance past the audition. 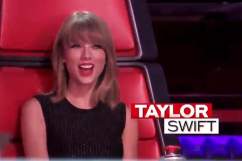 Read More
5 Fast Facts, Breaking News, Crime, Music, Reality TV, The Voice, TV
Delvin Choice, one of the stars of The Voice on NBC, was arrested and charged with a DUI in Oconee County, South Carolina.