Four rabbis were heinously murdered inside of Jerusalem synagogue on the morning of November 18. The rabbis were praying with about 20 other people when two Palestinian men broke in and attacked the congregation with meat cleavers and a gun. The attackers shot six other worshippers, not fatally, before police first-responders shot-and-killed the attackers.

Three of those who were killed were named as Moshe Twersky, Aryeh Kupinsky and Kalmen Levine. They are all U.S. citizens. A fourth rabbi who died was English-born Avraham Shmuel Goldberg, reports Haaretz.

Here’s what you need to know about Rabbi Kalman Levine:

He’s originally from Kansas City, Missouri. Rabbi Levine, 55, moved to Israel in 1982 and “never came back,” according to his former brother-in-law, Shimon Kraft, who was speaking to ABC News.

2. His Son Said His Dad Read the Torah All Day

My father would study [Torah] all day long and would return home at night only to learn some more until he would fall asleep in his chair. Abba [Father], you were in the middle of saying the Shema [prayer] when your soul left your body and the terrorists came and murdered you.

3. Rabbi Levine Is Survived by His 9 Kids

He is survived by his wife, nine children and five grandchildren. Like Rabbi Twerski, he has been buried at the Givat Shaul cemetery in Jerusalem. His former brother-in-law told ABC News that Rabbi Levine never had any safety concerns since moving to Israel.

4. When He Lived in Kansas, He Went by Cary William Levine

Levine’s (pictured second from right) with his graduating class in 1976. (Facebook)

KMBC in Kansas reports that Rabbi Levine attended the Hyman Brand Hebrew Academy in Overland Park Kansas, graduating in 1976. The station also reports that he still has family in the area. When he lived in Kansas, he went by the name Cary William Levine.

His father is a Kansas City personal-injury lawyer named Bernard Levine. He has practiced law in the area since 1955.

The Kansas City Star reports that family mourners had gathered at his home on the day the news of Rabbi Levine’s murder was made public. 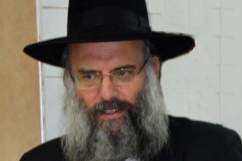 Loading more stories
wpDiscuz
4
0
Would love your thoughts, please comment.x
()
x
| Reply
Kalman Levine is one of the U.S.-born rabbis who were killed in a Palestinian terror attack at a synagogue in the Jerusalem neighborhood of Har Nof.