Rurik Jutting is being a dubbed a real-life American Psycho after the bodies of two mutilated prostitutes were found inside his Hong Kong apartment on November 1. Jutting, 29, was a high-profile trader with Merrill Lynch prior to quitting his job just days before the killings. He has been charged with two counts of murder.

1. He Took a Selfie With One of the Hookers, After She Was Dead

According to multiple reports, when police searched Jutting’s phone they found a selfie featuring the former banker and one of the already-deceased prostitutes. In addition to the selfies, cops found 2,000 photos and videos of the two dead women.

2. Jutting Was Educated at Cambridge

The Guardian reports that Jutting was a history student at England’s prestigious Cambridge University. After graduating in 2008, he went on to a career in banking. On his LinkedIn page, Jutting says that he was a “‎Structured Equity Finance & Trading (Asia)” at Bank of America Merrill Lynch. ABC News reports that in the days leading up to the deaths of the two prostitutes, Jutting had abruptly quit his job. A Bank of America statement confirmed that Jutting had, until recently, worked for the company.

In a Guardian report on Jutting’s court proceedings, it says that Jutting has not been allowed to contact the British consulate in Hong Kong until 36 hours after he was first arrested.

3. Cops Found Baggies of Cocaine in his Apartment

Early on the morning of November 1, in Hong Kong’s sleazy but gentrifying Wan Chan neighborhood, Jutting called police to his apartment building, the J-residence, where he pays over $3,000 per month in rent. ABC News reports that the building is popular with Hong Kong’s expatriate banker community. When cops arrived, they found Jutting covered in blood and one woman dead on the floor of his apartment with multiple stab-wounds. After taking the former-banker into custody, police searched his apartment. On his balcony, officers found the decapitated body of 25-year-old prostitute Sumarti Ningsih, an Indonesian woman who was known by police as a sex-worker. The Guardian reports that cops think she was killed on October 27 and sat in a suitcase since then on Jutting’s balcony. The second woman was named as Jessie Lorena.

Among the items that police took from his apartment as evidence were baggies of cocaine and sex toys.

4. His Facebook Page Is Adorned With Photos of Jutting With Asian Women

On his Facebook page, Jutting states that he’s a native of London, England. Also on his page are photos of him making out with various Asian women. His last post on social media came on October 31 when he screen shot an article with the headline “Money DOES by happiness.” A picture he posted on August 22, shows a statue of a man who looks like Ronald Reagan holding a sign saying “Will Work For Cash.”

5. Hong Kong Is One of the Safest Cities in the World

Despite being one of the world’s most densely populated cities and amid political turmoil, there were only 14 murders in Hong Kong between January and June 2014. It’s regarded by the UN as one of the safest cities in the world. A CNN travel article declared in 2014 that, “Hong Kong definitely triumphs as the safest city in the world.”

There are around seven million people in the city-state of Hong Kong. 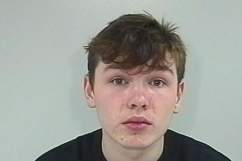 Will Cornick: 5 Fast Facts You Need to Know