Co-creator of the Simpsons, Sam Simon, was diagnosed with terminal cancer and has donated $100 million to charity, including his own the Sam Simon Foundation.

The Sam Simon Foundation also helps to provide service and assistance dogs for veterans and the disabled, including Iraq and Afghanistan veterans afflicted with post-traumatic stress disorder.

In 2012, Simon was diagnosed with colorectal cancer and told it had spread to other organs, with doctors only giving him a few months to live. He told Jon Lieberman that, “The diagnosis was I was feeling bad for a couple years, and I was diagnosing myself from television talk shows, so I was taking antidepressants and I was trying to get my testosterone levels up. But then it turned out my primary cancer was colon cancer that had spread to my liver, kidneys, abdominal connective tissues and my lymph system and maybe my brain. They’re not sure about that.”

In an interview with NBC’s Maria Shriver, he said, “They showed me my scans and said, these are the scans of a dead man. I said, ‘Is it curable?’ And the doctor goes, ‘We don’t use that word.”

3. He’s Donated $100 Million Dollars of His Money to Fortune

Simon said, “The sort of lifetime achievement stuff that I’m getting now is kind of like Tom Sawyer’s funeral because they all know I’m sick, I am getting buildings named after me and awards and stuff. The truth is, I have more money than I’m interested in spending. Everyone in my family is taken care of. And I enjoy this.”

He told the Hollywood Reporter in regards to his foundation, “We are going to expand all this stuff. We do a day in our mobile clinic where we do dog and cat surgeries for free except complicated procedures. For the first nine months, we couldn’t fill up the truck. But now it’s a huge success. It just took a while for the community to find out about it. And now I think we’re going to add another day for free surgeries. The Sam Simon Foundation is going to be very well endowed, and there’s a lot of stuff I want them to do.”

According to the Washington Post, Simon no longer drives and he doesn’t write much anymore either, focusing on his charities and philanthropy pursuits. 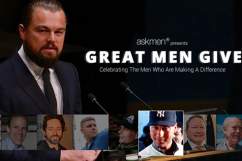 Great Men Give: 49 Men Who Are Changing the World You Live In

Among his own charities for animals, Simon has worked closely with PETA and has even drawn inspiration, “Ingrid Newkirk, who is the founder of PETA and one of the most influential people in my life … she came up with an almost therapy for me, where we planned and are still planning a series of animal liberations and actions that I get to participate in and enjoy and have something to look forward to at the same time.”

Simon has also donated heavily to Paul Watson and the Sea Shepherd, which lead to the naming of one of the four vessels under Watson’s animal rights fleet, being named after him, the M/Y Simon in 2012.

As co-creator of the Simpsons, Simon left the show when he clashed with co-creator Matt Groening and other writers. He told Vanity Fair, “I can’t honestly say we were getting along as well at that point as when the project started, it worked out for everyone. Everyone should be happy.” Even joking that, “I make tens of millions of dollars a year, which may not sound like a lot, but over 25 years, it adds up.”

8 Actors Who Should Star With Ryan Reynolds in ‘Deadpool’

Loading more stories
wpDiscuz
1
0
Would love your thoughts, please comment.x
()
x
| Reply
Co-creator of the Simpsons, Sam Simon, was diagnosed with terminal cancer and has donated $100 million to charity, including his own the Sam Simon Foundation.