A quadruple amputee who was considered a person of interest in the murder of his parents has committed suicide in Memphis. The news that Sean Petrozzino was found dead in Tennessee comes a week after Michael and Nancy Petrozzino were found shot to death inside their Orlando home.

1. He Killed Himself During a Traffic Stop

WMC in Memphis reports that Petrozzino had been stopped for performing an illegal U-turn on Vandalia Street, just outside of downtown Memphis (above). The Memphis NBC affiliate reports that as police approached his car after pulling him over, Petrozzino shot himself.

His death has not been confirmed by the Orange County Sheriff’s office, who are investigating the Petrozzino murders. Detectives from Orange County are en route to Memphis to follow-up.

2. Petrozzino Had 13 Surgeries During His Teenage Years

A South Florida Sun Sentinel article from 2000 describes how Petrozzino lost his limbs to bacterial meningitis when he was 16. He told the paper:

Lots of important things in my life just happened by chance. You know someone and get a job that makes you millions of dollars, or you get a disease. There doesn’t seem to be any reason some things happen.

During his youth, he underwent 13 surgeries for his condition.

3. His Marriage Had Just Ended & He Was Depressed, Say Friends

Petrozzino had just separated from his wife and had moved back with his adoptive parents, Michael and Nancy Petrozzino, a week before the murders. WFTV reports that he was also having financial difficulties. A friend of Petrozzino told the Orlando Sentinel that the marriage was “completely over.” The friend, who was not named, said:

They were going through some troubles for the past two months, and that’s when I started noticing a change in him. We found out it was completely over. He said he was completely devastated. That was a day or two before this all happened.

4. His Dad Worked as a Disney Character

Petrozzino’s mother, Nancy, 63, was an elementary school teacher. The alarm was raised on November 4 when she failed to show up to teach her class. Orange County Public Schools spokeswoman Kathy Marsh told the media, “We’re at a loss. She was very well-liked.”

Petrozzino pictured with his dad, Michael, in July 2013. (Facebook)

His dad, Michael, 64, worked as a costumed character in Disney World, reports WFTV.

Police believed that Petrozzino was armed and dangerous and is headed to South Florida, where he grew up and still has friends. He was driving his dad’s red Toyota Camry when he committed suicide.

He was last spotted at an ATM in Orlando on November 4.

You can listen to Jane Watrel of the Orange Sheriff’s office discussing the case below:

He had no hands and walks on prosthetic legs. Police never called Petrozzino a suspect, but he was considered a person of interest in the deaths of his parents. A friend of Petrozzino’s, speaking to the Orlando Sentinel, wondered how the amputee could have pulled the trigger of a gun.

Petrozzino posted this MEME to his Facebook page on July 4, 2013.

According to his Facebook page, Petrozzino supported the anti-surveillance movement, The Day We Fight Back. On his page, it says he attended the University of Florida and that he moved to Atlanta in 2013. His mother-in-law told the Orlando Sentinel that Petrozzino had moved to Atlanta with his wife. 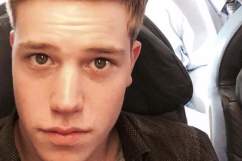 Loading more stories
wpDiscuz
2
0
Would love your thoughts, please comment.x
()
x
| Reply
Sean Petrozzino committed suicide in Memphis. The quadruple amputee was a person of interest in the murder of his parents Nancy and Michael in Orlando.