After being drubbed 2-1 at the hands of Columbia on Friday, the U.S. Men’s National looks to rebound and finish the year strong against the Republic of Ireland at Aviva Stadium in Dublin.

The American side, which currently features a mixture of World Cup hold overs and fresh faces, has largely struggled since returning from Brazil going 1-1-2 with their only win coming against the Czech Republic back on September 3rd.

For The Republic of Ireland, the game comes in the midst of early qualifying matches for Euro 2016 where Ireland beat Gibraltar 7-0, tied defending World Cup champions Germany 1-1, and lost most recently to Scotland 1-0.  The 61st ranked Republic of Ireland will also be without its all-time leading goal scorer, Robbie Keane, who re-joined his club team L.A. Galaxy for their upcoming MLS playoff match.

U.S. Men’s Soccer vs. The Republic of Ireland

While the overall results of the U.S. Men’s Soccer team haven’t necessarily been bad, the way that they’ve happened has unquestionably left a lot to be desired.

Beyond the lack of possession and the bone-headed giveaways in the midfield, the U.S. has also conceded goals in the 86th, 88th, and 87th minutes of the last three games respectively, meaning that two would-be wins turned into ties and one would-be tie turned into a loss all within the last five minutes of the game.  Whether this has to do with conditioning or a lack of mental focus remains to be seen, however, it’s certainly not a trend American soccer fans would like to see continue.

Against Ireland, don’t be surprised to see Klinsmann revert back to a 4-2-3-1 with Geoff Cameron or Alfredo Morales alongside Kyle Beckerman to break up any oncoming attack coming from the opposition in defensive midfield.  It also wouldn’t be surprising to see another start from 18-year-old Rubio Rubin at forward or outside midfield after a strong performance against Columbia.

Beside the formation, the biggest thing to keep an eye on is central attacking midfield where the newly mustached Mix Diskerud will likely retain his position, despite his struggles against Columbia, due to a lack of other good options.

Scouting the Republic of Ireland

The Irish are a far, far cry away from having the attacking flair of a team like Columbia or Ecuador, and with their all-time leading goal scorer not available for the match it remains to be seen if they can generate enough attacking chances to test the American defense in the run of play.  With that said, however, Ireland proved against Germany that they could make the most off of a small number of chances especially regarding set pieces.

With this in mind, keep an eye on Irish forward Shane Long who poses the biggest attacking threat to the United States.  Long is in good form after scoring two in his last game  with Premier League side Southhampton and was deployed as the lone Irish striker in Ireland’s last game against Scotland Friday.

It’s also worth keeping an eye on well-known defender John O’Shea who will be guarding his Sunderland teammate Jozy Altidore, and is dangerous in the air on set pieces.

Although the red, white and blue have not been in the greatest form recently, Ireland is arguably the worst team the U.S. has faced since before the World Cup.  For this reason expect an American victory even if its not as thoroughly convincing as it probably should be. 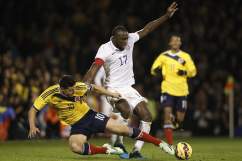 How to Watch USA vs. Ireland Soccer Live Stream Online