President Obama Delivers an Address to the NationPresident Obama lays out the new steps he's taking to fix our broken immigration system. Watch the address live on November 20th at 8pmET and learn more at WhiteHouse.gov/Immigration-Action.2014-11-19T19:27:14.000Z

President Obama is set to deliver an address Thursday night to address what the White House calls America’s “broken immigration system” and outline executive action he plans to take that will likely halt deportations for certain undocumented immigrants.

You can watch the speech live in the video player above starting at 8 p.m. Eastern time.

The address comes two weeks after Republicans routed Democrats in the midterm elections, winning more than enough seats to take control of the Senate when the next Congress is sworn in in January.

Republicans have cried foul at the expected executive action Obama plans to take, accusing him of overstepping his Constitutional powers by bypassing Congress.

Obama, for his part, has acknowledged the executive action will be a stop-gap measure, but claimed it’s necessary because of Congress’ inability to pass a comprehensive reform bill.

Read more about what Obama plans to say in this post. 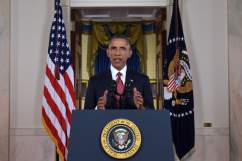