A Las Vegas man is charged with running “one of the most horrific child sex rings in memory.” Christopher Sena was arrested back in September in relation to sex crimes but the full extent of the alleged abuse only became apparent in December. Sena is charged, along with his wife, Deborah, and ex-wife, Terrie, of submitting his own children to acts including incest and bestiality.

1. Cops Recovered a Video of Sena’s Children Having Sex With the Family Dog

KLAS-TV reports that Chris Sena and his ex-wife, Terrie, are the biological parents of two children allegedly victized. Terrie and Chris were married for 25 years. The alleged abuse went on for years and the children, a boy and a girl, are now teenagers. The charges facing Sena, his wife and ex-wife include incest, bestiality, and lewdness with children. Cops told CBS Las Vegas that they recovered video tapes at the Sena home that showed children having sex with the family dog. The Las Vegas Review Journal reports that Sena is alleged to have told one of his children that he would break their legs if they told anyone about the abuse.

Sena is locked up at High Desert State Prison in Las Vegas. (Wikipedia)

According to the Las Vegas Defense Group, the maximum sentence for lewdness with a minor in Nevada is life in prison with the possibility of parole after 10 years and a fine of $10,000. If found guilty, Sena will have to register as a sex offender. On the incest charges, Sena could face two years to life and another fine of up to $10,000, if he is found guilty. Chris Sena is being held on a $250,000 bail.

2. Sena Was First Arrested in September; Police Have Been ‘Horrified’ by the Developments in the Case Since Then

The full case against Sena wasn’t made until December, but he was first arrested for sexual assault in September 2014. Deborah Sena and Sena’s ex-wife, Terrie, weren’t arrested until December 11. CBS Las Vegas reports that detectives are “horrified” by the developments in the case. The Las Vegas Review Journal reports that that the abuse only came out when Deborah Sena, one of her children, and a friend went to a family lawyer to make the claims against Christopher Sena. The alleged abuse mainly happened at a trailer in Las Vegas that was raided by cops in September, when police found 30 pieces of recording equipment.

3. Sena Constantly Posted on Facebook About His Love for His Kids

Sena uploaded this picture of him and Deborah in August. (Facebook)

According to his Facebook page, Christopher Sena has four children, three sons and one daughter. He made daily Facebook posts until his arrest in September. Many of his status updates regarded his family and his wife, including this one on August 6:

Some more beautiful pictures of me and my wife, don’t we make the best couple in the world, if you think so please give this a like and comment what you think. My wife is always doing something to make me laugh.

This post came on July 27, when he complimented his son for doing such a great job on cleaning the yard:

House, jacuzzi, and pool are clean, also got the yard mowed and looking fresh and my son also learned a valuable lesson, after cleaning up your mess after you make it, its easier to clean the house. And I was really proud of him when we mowed the yard, he stood up and took charge instead of standing around, I think he’s finally getting the hang of things, because I didn’t have to yell at him, I just have one more son to go.

Police have said the Senas abused up to eight children, including members of the extended family. A Las Vegas police spokesperson said that not all of Christopher Sena’s kids were subjected to abuse. The Las Vegas Review Journal reports Deborah Sena’s lawyer, Kristina Wildeveld, saying:

4. He Helped Throw a Party for Las Vegas Cops a Month Before His Arrest

Sena helping to set up the “Activation” party for the Las Vegas Metropolitan Police in August 2014. (Facebook)

Prior to his arrest, Sena worked as a sound engineer for Area 51 Stage Works. On August 9, Sena helped throw a party for the metropolitan police in Las Vegas. The party was being held for the community and was designed to “calm everybody down and get information.” Heavy.com reached out to Area 51 State Works via phone, but the company’s listed number has been disconnected and the company’s Facebook page hasn’t been updated since September, when Sena was first arrested.

5. Terrie Sena Was a Kindergarten Teacher

The Las Vegas Review Journal reports that Terrie Sena is a registered substitute kindergarten teacher. The paper reports that her license to teach in Nevada is good through 2018. She stood in court on December 16, alongside Deborah Sena. They are being held without bail. A friend of Terrie Sena’s, Liberty McCarthy, told Heavy.com she believed her friend was innocent and that she too had been subjected to Christopher Sena’s abuse. McCarthy said Terrie Sena was “scared to open her mouth” about Sena. She said Terrie had just gotten married (in November 2014) to a trucker from Montana named Ed Clements (above). 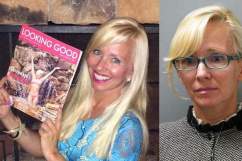